Life in Borgia - the fortune teller, from the portfolio 'An Odyssey' 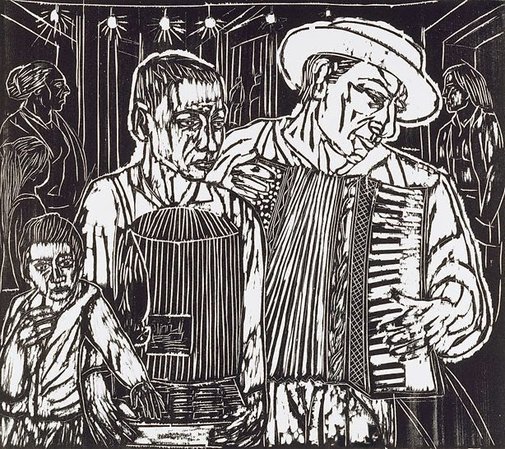 The series 'An Odyssey' consists of 20 woodcuts and title page. An edition of 10 was printed by Jenny Pollack in 1989 and hand-coloured by the artist. The gallery has an artist's proof set before hand-colouring. 'The Odyssey' recounts the experiences of the artist's parents, Guiseppe (1909-86) and Teresa Zofrea née Garigliono (1905-75). Guiseppe migrated to Australia without his family in 1949, and was not to see them until they joined him in Sydney in 1956. 'Life in Borgia - the fortune teller' is based on the artist's memories of carnival time in his home town.

"Every year a man playing a piano accordion would come to town with a boy who wore a cape and carried a little green parrot in a cage. Below the floor of the cage was a drawer full of playing cards. The music of the accordion would rouse up the women and children from their houses - the men would be out in the fields, far from the scene - and the women would pay to have their fortunes told. The little lime-green parrot would crawl along its perch taking sideways steps in a calculating kind of way, and then it would lean over and reach into the drawer. It would pick out a card with its beak, and the woman's fate would be written there. The card my father's mother drew just before his birth, to be a totem or coat-of-arms, was the horseman setting out on a mysterious journey - the Traveller". (Sally McInerney, 'The journeyman, a story of migrant life, a series of woodcuts by Salvatore Zofrea', Sydney: Picador, 1992)

Browse other works by Salvatore Zofrea