Barron Falls. 700 ft, from the portfolio Australian Photographs c.1890-1910 from the collection of H.W. Walker 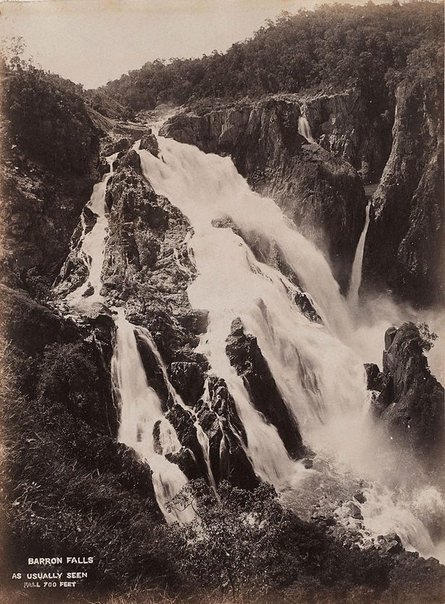 Arthur Streeton, on a painting trip to Queensland in 1924, complained that most of the dramatic landscape around Cairns was seen only ‘passing in train or Steamer’ and was difficult to access for the purpose of painting.1 He only managed a watercolour of Barron Falls. This photograph, one of ten from the Herberton Railway Collection in Cairns, was probably a commission, intended to illustrate some of the spectacular scenery on view during the train trip from Cairns to Kuranda.

The construction of a railway in this northern part of Queensland was proposed after a particularly bad season in 1882, when the mining town of Herberton was isolated by floodwaters. Construction began at the Cairns end of the line. Cutting through mangrove swamps and forests, the line crossed in front of the Barron Falls before reaching Kuranda. These views of spectacular scenery were often displayed in the public areas of train stations. They were also used to decorate homes for, as the pioneering historian of Australian photography Jack Cato remembered, this was a time when ‘down from the walls came the Continental engravings to be replaced by 15 x 12" photographs of the Blue Mountains and the Dandenong Ranges’.2