Fools gold, from the series Kermadec 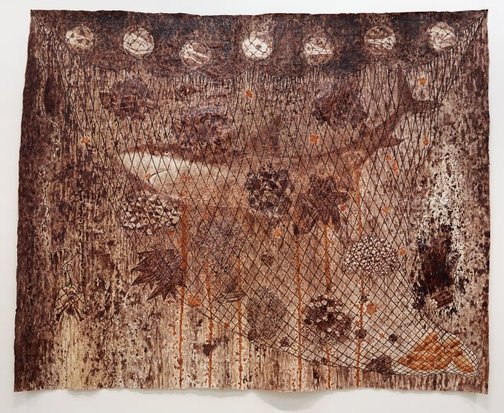 'At the top of the Trench swim the top predators of the deep; whales and sharks. And now, although nowhere (as yet) visible to the eye, other subversive life (or death) forms are circling in the water: fishing and mining interests. The ocean is not quiet; new hunts are on, greedy for a kill. New breeds of corporate pirates have their spyglasses trained on the Kermadec treasure chest below. To them, it looks like a submerged bank vault: the volcano teeth have gold fillings. Lying in the sunlight on the deck on the surface of the sea, I shut my eyes to picture the volcanoes. Blood flows. Behind my eyelids I saw red. Rock the boat'. (Fiona Hall quoted in Kermadec: nine artists explore the South Pacific, Pew Environment Group in association with Tauranga Art Gallery, Wellington, 2011, p 74)

Fiona Hall is regarded as one of Australia's most foremost and important artists. Her issue based practice critically addresses gender, colonialism, consumerism, globalisation, environmental depredation, and the nature/ culture division.
'Fools gold' 2012 was inspired by an artist's expedition to the contested Kermadec Trench led by Pew Environmental Group in 2011. The Kermadec Trench is a 1,200 kilometre channel of overlapping tectonic plates north-east of New Zealand, stretching toward Tonga. The site, a migratory path for important species of marine life and abound with mineral rich underwater vents, is regarded as one of the most geologically dynamic yet vulnerable environments on earth.

The Kermadec Trench expedition sought to raise awareness of its preservation as it is a lucrative assist for mining industries and commercial fishing. Hall's 'Fools gold' 2012 directs our attention to this very real susceptibility. Created in the traditional methods and natural materials of Tonga, Hall has decorated barkcloth made the mulberry tree with natural dyes and ochres. Depicted is a reef shark snared in a net anchored by gold bars and buoyed by floats illustrated with the skulls of endangered species.

Scarred into its skin are the periodic elements for gold (Au), lead (Pb), silver (Ag), barium (Ba), copper (Cu) and zinc (Zn). Also entangled are sticks of dynamite, coral, and a skull and cross bones.