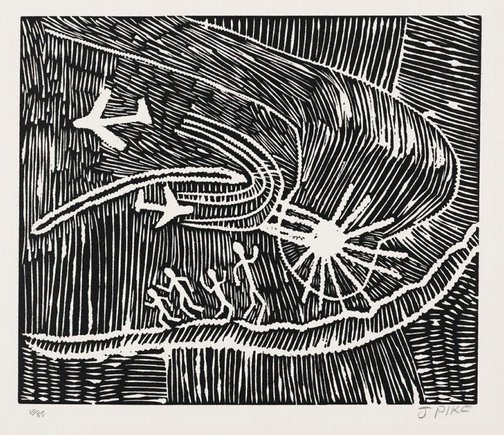 Jimmy Pike was born in the Great Sandy Desert at Kurlku. As a child he was a member of a nomadic group; when he was a young man he was taken to a station at Cherrabun, near Fitzroy Crossing, to become a stockman. He started painting and making prints in 1980, while taking art classes at the Fremantle Prison from Stephen Culley and David Wroth (who later formed the company Desert Designs to promote the work of Pike and other Aboriginal artists). His work deals largely with his country and the experiences of his people living in the 20th century. He makes linocuts which generally have to be converted to screenprints for editioning, due to the very heavy carving of the blocks that leaves them too fragile for use.

"Old time story, not Dreamtime. People story - real one. This is a real story. One day they went hunting near this waterhole. My father went over to Canning Stock Route with other wife, left mother and little sister at waterhole. One day they went hunting from waterhole. They make bushfire in thick grass, spinifex. Make big fire, burn big, stand at edge. Little kangaroo and goanna run out. Then they hear noise like dragonfly at swamp. Plane come right into fire and drop something (a bomb) on fire. Mother and children hide under bush and tree. They went back to waterhole. Then they come back they find that place, they find bits of tin from that thing. Still there today". (Nadine Amadio Jimmy Pike, graphics from the Christensen Fund collection Perth: Christensen Fund, 1988, pg. 32)

Browse other works by Jimmy Pike