View of The Rocks - Old Sydney (Study for 'The Rocks') 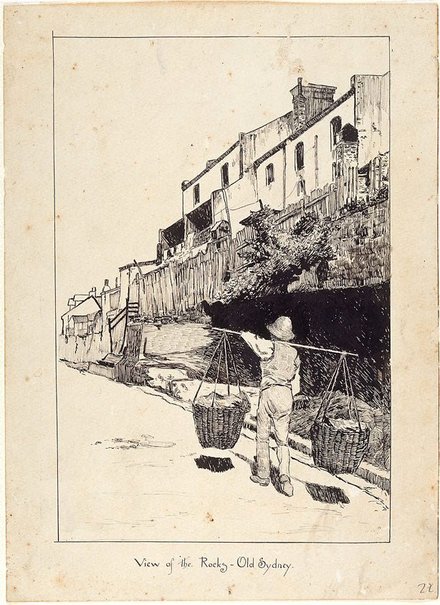 Livingston Hopkins was born at Bellefontaine, Ohio, USA. He studied drawing briefly in New York under August Will (1834-1910) and established himself as a cartoonist, engraver and illustrator using the nom de plume 'Hop' in a variety of journals, newspapers and books, including his own 'The comic history of the United States by Livingston Hopkins with seventy-five illustrations from sketches taken at a safe distance by the author' (1876). At the urging of W H Traill of 'The bulletin', he came to Sydney in 1883 as staff artist and stayed to become the best known and most prolific 'Bulletin' cartoonist of the time. He retained his American accent and identity however – according to Frederick D Kersher jnr.: '... Hopkins' pro-American bias always stood out clearly. He delighted in American allusions. He called his den the 'Wigwam'; his close friend Fullwood was known familiarly as 'Uncle Remus', and he in turn as 'an old Puritan'. Neither he nor his wife ever lost their American accents' ('Ohio History', vol. 63, pg. 132). Hopkins introduced etching to a number of artists in Sydney, including Julian Ashton, Tom Roberts, Arthur Streeton, B E Minns and Henry Fullwod. This is a drawing for the etching of the same title, also in the Gallery's collection.