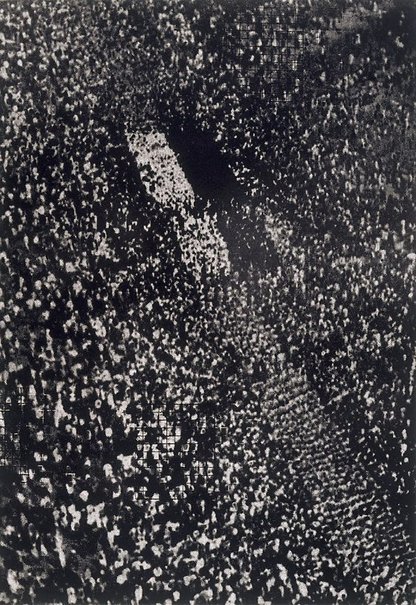 Bea Maddock was born in Hobart. She studied at Hobart Technical College 1952-56 and painting and printmaking 1959-61 under William Coldstream, Anthony Gross and Ceri Richards at the Slade School, London, with one month at the Academi de Belle Arti in Perugia, Italy. She returned to Australia in 1961, settling in Launceston, where she studied ceramics part-time and established a studio. In May 1964 she moved to Melbourne briefly, where she made woodcuts and drypoints, before returning to Launceston to teach at Launceston Technical College. She bought her first press and made woodcuts and etchings, and her first artist's book, of woodcuts, This time. In 1967 she painted and made screenprints. In the late 1960s her work changed, reflecting the influence of American and British pop artists including Andy Warhol, Robert Rauschenberg, R B Kitaj and Jasper Johns, whose work she had encountered in London. In 1970 she was invited to teach printmaking at the National Gallery School, Melbourne, where she taught three days a week. She experimented with photo-screenprints in 1970, and photo-etchings in 1971. Maddock returned to Launceston in 1983, where she lives and works.

'Cast a shadow' was printed by the artist at the Victorian College of the Arts.

"This was a huge crowd, but the nice thing about it was it had this mass of people. There was this formality of the procession and I started playing around with the positive and negative transparencies that I had from the photograph. So you get this tonal shift - the shadow wasn't actually in the original photograph. And so it's like drawing again... I actually did a whole series of lithographs of just the details, which haven't survived, they weren't very successful. But I spent a lot of time doing them because I was analysing defined little shapes which actually were people.
'Cast a shadow' was taken in the negative image and I remember having an idea that because I started in one corner - I was actually drawing this over the light areas - It was like a shadow passing over the landscape, you sometimes get them, moving cloud shadows. And so that's why it got called that". (quoted in Anne Kirker and Roger Butler, 'Being and nothingness: Bea Maddock, work from three decades', Canberra: Australian National Gallery, 1992, pg. 81) 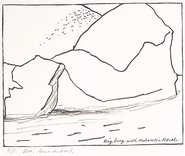