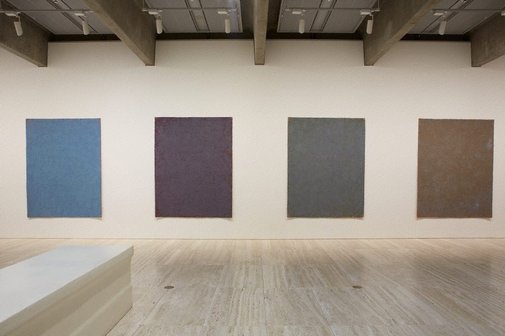 'The realisation of matter and spirit as one is, for me, the purpose of art. It could be said that the so-called 'spiritual' is, in fact, finely-tuned material with its own particular 'structures', 'colours' and 'qualities' generated by the very act of seeing.'

'Canopy LI (Scelsi I - IV)' by Brian Blanchflower is a series of large scale, densely layered paintings that subsumes the viewer in its vital presence. The hessian panels appear monochromatic, yet the building up of various pigments is visible in the coarse, thick paint on the support. Applied with large, stiff brushes, the paint appears mineralised, suggestive of geological accretion. The dense material surface of the work is evidence of it having been worked over at length.

Colour is not merely an aspect of the work, it is intrinsic to it - a physical reality. Viewed at close proximity, the work shifts in tone as light catches its swelling, pitted surface. From afar, it is unified, appearing flat and infinitely deep at once.

The materiality of Blanchflower's work is intrinsic to his exploration of the spiritual. Through his practice he considers issues of existence, transcendence and the cosmos. His interest in the notion of looking as a metaphor for spiritual contemplation finds perfect expression in the 'Canopy' series, which the artist began in 1985. The sky, or space, is pivotal for Blanchflower as the ultimate subject for painting, allowing the medium its greatest freedom.

Landscape has also deeply influence in Blanchflower's practice, particularly the topographies of England and Australia. In the 1960s, as a young artist Blanchflower walked the English countryside and drew inspiration from megalithic sites, such as Stonehenge. Notably, such sites symbolise ancient endeavors to understand the nature of humanity within the universe. When Blanchflower arrived in Australia in 1972, settling in Perth, he remained concerned by the ability of art to realise the spirit of place or being in material form.

Browse other works by Brian Blanchflower