Figures in a classical landscape 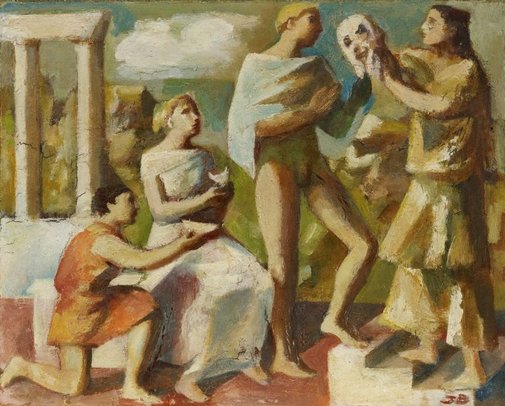 'Group of figures in a landscape' c1950 was completed following the artist’s critical recognition of the 1940s which saw her win the Sir John Sulman Prize for genre painting in 1942 and 1944. Its procession of classical figures embedded within a distant, unspecified setting is not unlike the Gallery’s 'Electra' 1944. Operating outside of modernist, nationalist and socio-political narratives in Australian art, Bellette drew upon Europe’s reinterpretation of the 'essence' of antiquity two decades earlier. It has been suggested that mythology was her means of investigating societal values and psychological traits, even the Australian experience. Bellette stated in 1952:

'I have tried to paint groups of figures in landscape, using mythology as a pretext; my main preoccupation was to try and order space and colours in a certain way, so that they would suggest to me some atmosphere I recognise …'

Significantly, Bellette was a member of the Society of Artists and a co-founder of the Sydney Group.

Browse other works by Jean Bellette