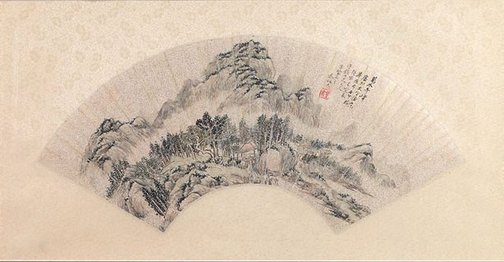 An inscription on the top-right reads, "Fantastic Peaks among Ten Thousands Trees, painted by the Governor of Lianzhou, three days before the Dragon Boat Festival [fifth day of the fifth moon] in the year renshen [1872], after Fan Huayuan [Fan Kuan, active 1023-31], for the appraisal of Ziqing, the seventh brother. Qin Bingwen." The artist's name is followed by a seal with two characters that stands for his hao - 'Yiting'.

Qin Bingwen, alias Yanyun, was a native of Wuxi, Jiangsu province. He took his 'juren' degree in 1840 and then held several positions within the imperial government, such as a ranking official at the Ministry of Civil Affairs. He was above all a successful official, only painting as a noble pursuit in his leisure time.

The painting in this fan shape depicts a conventional panorama of riverbanks with trees. In the foreground a thatched hut is nestled in a cluster of immense trees. It thwarts the flow of a cascade as it stretches along the bottom of the picture. Two men sitting by the open window of the hut are seen chatting. Beyond the top of the trees, an awesome mountain rises like a crouching tiger above the foggy range. The mountain and rocks are defined by alternative light, linear texture strokes, dark ink and indigo dots of vegetation. The looseness of style, simplicity of structure, near monochrome palette with touches only of very light colour all evoke a style close to the Qing orthodox school such as that of Wang Jian (1598-1677).

fan; ink and colour on paper