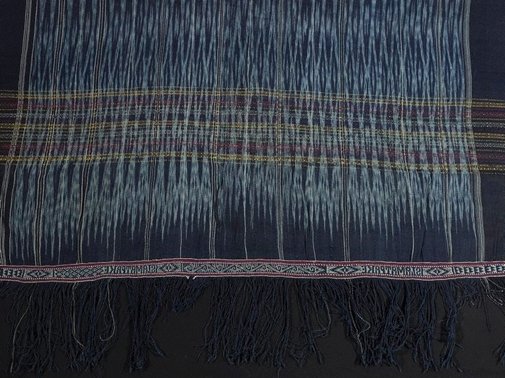 Batak textiles were never pictorial nor did they include recognisable figures but consisted primarily of warp 'ikat' designs and simple geometric shapes. This ulos cloth clearly illustrates a coupling of indigenous and Christian signals. The pattering of the main body of the textile remains consistent with Batak design whilst the twined edge which was traditionally the work of men is quite literally intertwined with Christian text. The early mission schools which taught young Batak girls needlework also encouraged them to expand their repertoire of supplementary weft patterns to include the writing of the Latin alphabet. In this example, the text which reads 'slamat pake', can be translated from the Indonesian as meaning “well being to the wearer”. Whilst still providing talismanic properties, the twined edge of the cloth now embodies a new context for textile production and is engendered by Christian rather than animist notions of love and protection.