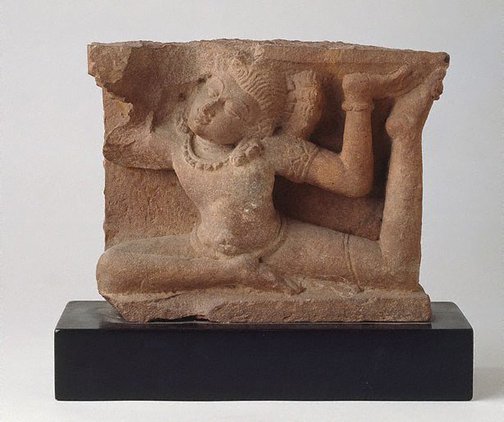 This sculpture of Gandharva would have once adorned the outer wall or overdoor of a Hindu temple. In Hindu mythology, the Gandharvas are regarded as radiant beings that sing sweetly on the mountains, but may be dangerous especially at twilight when they roam about and haunt forest pools. They are attributed with great healing powers and are also associated with marriage and the protection of virgins. This Gandharva is depicted with a heart-shaped face and elaborately coiffed hair. His body glides through the air with one leg folded in and the other bent at the knee, neatly fitting into the square architectural moulding. With his arms raised and his palms are turned upward, it is as though he were lifting the weight of the temple into the heavens.

Gift of the Estate of David Strachan 1995