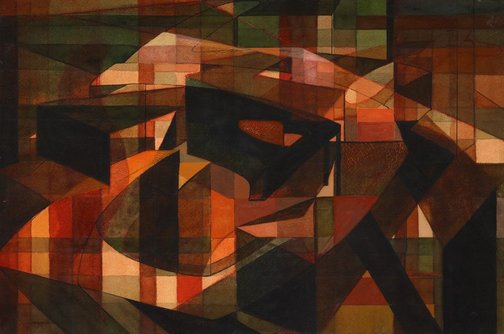 Margo Lewers was a key figure in post-war Sydney abstraction. A painter and sculptor, she briefly studied art and design at London’s Central School in 1934 and took irregular painting classes with Desiderius Orban in Sydney between 1945-50, but was otherwise self-taught.

In 1933 she made her first visit to Britain and Europe, where she met artists including Barbara Hepworth and Ben Nicholson and the critic Herbert Read. Her encounters with these key modernists were to shape her subsequent work. In 1941 she became an active member of the Contemporary Art Society, holding her first exhibition of abstract paintings in 1952.

The 1950s was a transitional period in which Lewers developed her skills in oil and watercolour with the principles of geometric abstraction informed by the constructivist principles of Sydney artists Grace Crowley, Ralph Balson and Frank Hinder. This watercolour was first shown at the Contemporary Art Society, Sydney in November 1953, and then in a solo exhibition at Peter Bray Gallery, Melbourne in April 1954. The watercolour exhibits sophisticated overlays of watercolour pigment to highlight the interplay of light and geometric form. These formal concerns were to remain a feature of Lewers’ paintings and plexiglass sculptural works in the following decades.

Purchased with funds provided by the Australian Prints, Drawings and Watercolours Benefactors' Fund 2017

Browse other works by Margo Lewers 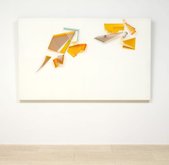 Margo LewersComposition in red and blue circa 19549034