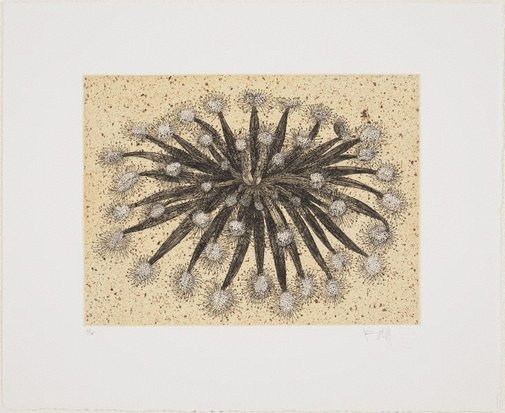 This series grew from a print portfolio project, 'Replant' 2006, published by Nomad Art Darwin and printed at Basil Hall Editions, Darwin. Hall made two etchings for inclusion in the portfolio ('Shrubby Dillenia leaf and wasps nest' and 'Green ant nest'), and then an additional three prints, independent of the portfolio, in an edition of 15. They are conceived as a series of five.

She noted of her research:

"In the bush at Daly River at the climax of the wet season, the problem could have been one of finding a conceptual lead into the overabundance of plants and amongst the undergrowth were (sic) ambushed by the batallions of insects which also inhabit the bush. This insect espionage lured me to search out minute details – nests, cocoons, the insectivorous plant Drosera dilato-petiolaris – each engrossing as an isolated specimen but also revealing facets of the entire finely tuned ecosystem, evolved over eons, which I sensed all around me…

I came to view the bush as both battle ground and site of extraordinary entrepreneurial inventiveness and cooperation, in which each organism, by way of staking its claim and setting up home and finding sustenance played its part as landlord or tenant, and took its turn as predator then perhaps prey.

Here at Daly River all of the requisites for survival and regeneration could be observed; if only we human species could all find a way to live in a similar state of biological equilibrium".

Purchased with funds provided by the Australian Prints, Drawings and Watercolours Benefactors' Fund 2007