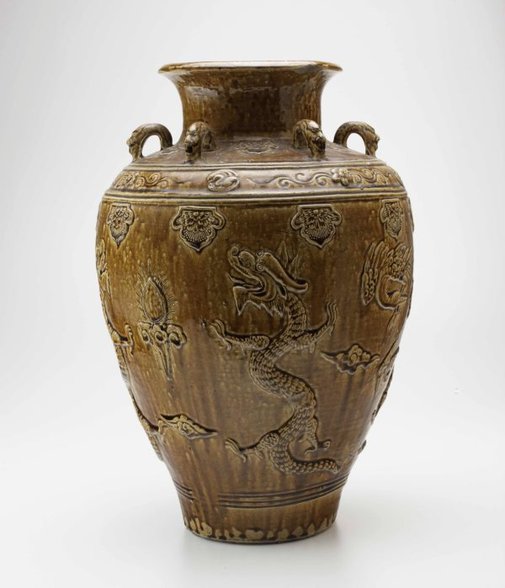 This large urn has six dragon loop hoops on the shoulder (one is missing) interspersed with stamped decorations of floral pedals beneath a band of alternating flowers and birds. The body bears stamped motifs of two pairs of ascending dragons each facing a flaming pearl on top of a scrolling cloud. In between are two pairs of cranes turning their heads towards the dragons.

Martaban urns are named after the port of Martaban on the west coast of modern-day Burma, which was an important link in the China-India ceramic trade. Goods were transported overland from China to Martaban, and from there were shipped to West Asia, India and Africa in the Song and Ming dynasties. Martaban ceramics created in unofficial kilns in China were typically large, sturdy storage jars, as shown here, and were common throughout the Indonesian archipelago. The jars played an integral part in tribal culture and were regarded as repositories of supernatural powers. They could be filled with local rice wine or even holy water from the Ganges, and were also used as funerary jars.