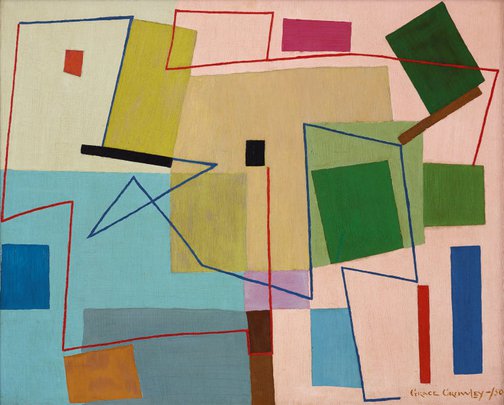 Grace Crowley is a pioneer of abstraction in Australia. She is particularly noted for the exceptional paintings that she produced from the 1940s, where she extended elements of her earlier cubist works and created constructivist compositions that were built on the expressive potential of dynamic colour and shape alone. Making the radical leap into total abstraction, Crowley’s works were amongst the first non-objective paintings produced in Australia.

After initiating a traditional art education in Sydney in 1907, Crowley studied in Paris in the late 1920s under the cubist artists André Lhôte and Albert Gleizes. She attended Lhôte’s summer school in Mirmande and visited Gleize’s art colony Moly-Sabata, later speaking of the impact of these experiences on the development of her work. Returning to Australia, Crowley had co-founded one of Sydney’s first modern art schools by 1932, where she taught the theories of academic cubism as well as the geometric systems of dynamic symmetry. Through her work as both artist and teacher, Crowley influenced a key group of modernists in Sydney and became significant in advancing the city’s contemporary art movements.

Crowley developed her painting within a close network of progressive artists; she had a particularly close aesthetic alliance with painter Ralph Balson, but it is the distinctions of her own work for which she is now celebrated. Her intensely coloured, geometric compositions pulsate with an innate energy, encapsulating Crowley’s belief in the correspondences between the rhythms of her abstraction and the systems of the universe.

'Abstract painting', (1950) is an exceptional work within Crowley’s concentrated oeuvre of non-objective paintings. A rhythmic construction that oscillates between open linear shapes and block-coloured forms, the work clearly visualises the distinct terms of Crowley’s geometric language of abstraction. The vivid colouristic surface has a luminous impact which furthers the energised choreography of the composition.

While Crowley’s works are products of her Sydney milieu, the utopian ideals underpinning her abstraction speaks of modernism’s internationalism. Characterised by notions of colour, light and rhythmic construction, Crowley’s paintings link to the essential ideas informing the global movements of abstraction and the uncompromising claim of its artists that representational modes could no longer poetically embody the modern condition.

Dianne Ottley, Grace Crowley's contribution to Australian modernism and geometric abstraction, 'Chapter Five - Partnership in Abstraction', pg. 105-130, Newcastle upon Tyne, 2010, 123. "In contrast, 'Abstract Painting' 1950 (Private collection) is a strongly angular composition, with the use of stand alone rectangles. The use of the (string) line is also angular and used as a pathway through the painting, the intensity of colour standing out clearly against the irregular quadliaterals and polygons. She has used small areas of intense colour against much softer hues, to punctuate the composition."

Elena Taylor, Grace Crowley: being modern, 'Progression and collaboration - abstraction', pg. 40-55, Canberra, 2006, 43-46, 58 (colour illus.), 62. "In both 'Abstract painting' 1950 (private collection, Sydney) and 'Abstract' 1953 (AGNSW) Crowley uses an overlay of jagged lines to generate movement across the composition. In 'Abstract painting' 1950 (private collection, Sydney) this is counterpointed by the inclusion of brightly coloured rectangular shapes punctuating the composition and emphasising the picture plane."

Browse other works by Grace Crowley