The tongue in the middle of the port 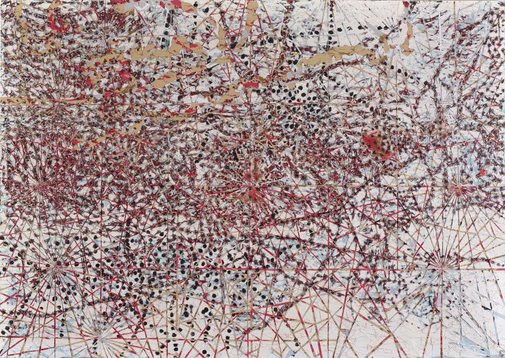 This painting was first exhibited in ‘Sea Monsters’, a solo exhibition held in 2014 at the Rose Art Museum, near Boston. Inspired by the fantastical creatures used by Medieval cartographers to indicate uncharted waters, works in the exhibition alluded to the contradictory feelings of allure and threat that often characterise our response to the unknown.

'The tongue in the middle of the port' is made from merchant posters found near the artist’s studio in South Central Los Angeles. It resembles a giant map but rather than offer a scientific description of a territory it evokes the socio-economic conditions of a neighbourhood in a near constant state of reinvention. As Bradford has described:

“I started thinking about how my studio is in South Central...where people are struggling, underwater with loans and mortgages. And that made me think about the conquistadors, the history of colonization...Then I thought about the ancient waterways that facilitated colonization - how they moved sexy cash along. Then about the mysteries of the water - how people thought the ocean was filled with monsters. And how when people think about South Central - the way it’s been depicted - it’s full of its own version of sea monsters. The unknown - those dark, scary waters.”

Mark Bradford
The tongue in the middle of the port