The sun as error 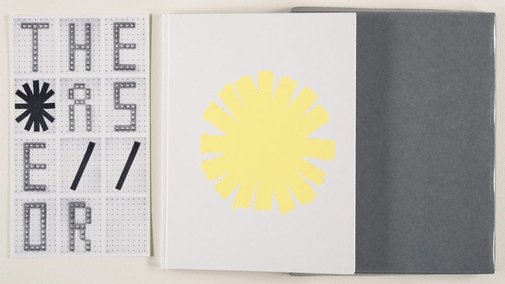 Shannon Ebner was educated at Bard College, NY and Yale University graduating MFA in 2000. She has lived and worked in Los Angeles for 10 years. She held a solo exhibition at PSI New York in 2007 and featured in ‘Learn to read’ at the Tate Modern, London the same year. She was represented in the 2008 Whitney Biennial. Ebner teaches at USC Roski.

Shannon Ebner’s photographs consistently involve a visceral experience with language, as well as an economy of materials linking her to the conceptual practice of Ed Ruscha and Bruce Nauman. Words and signs are treated as physical entities, subject to destruction and decay. Her laconic style and fascination with palindromes links her to the traditions which appear in both visual and literary forms in the U.S. Lisa Turvey wrote in ‘Aperture’ #188, 2007: ‘Ebner knows that words and photographs convey temporary, and often false realities…’ so her constant recontextualising of image and sign is not only a way of acknowledging the decay of meaning but also taking hold of meaning and reaffirming its power as a constructive force.

In her book ‘The sun as error’, Ebner presents not only her photographs, including ‘Sculptures involuntaires’ (2006) [plates 126-127], but a range of instructional diagrams and illustrations dealing with signs, optics, as well as a small section of explanatory text and notes, all of which reflect the artist’s ongoing fascination with the interplay of written form with photography and the multiple meanings that can result.

The artist collaborated with Dexter Sinister (designers Stuart Bailey and David Reinfurt) in the book’s production which draws upon the design legacy of Muriel Cooper, the first design director of MIT press and cofounder of the Visible Language Workshop. Cooper has been credited with ‘reorienting and repositioning the direction of an artist’s monograph’ (‘Photo-eye’ 2009) and the yellow asterix glyph screenprinted on the book’s cover is borrowed from a 1970s Visible Language Workshop produced poster. This symbol becomes a recurring motif throughout the book appearing in text and photographs. The use of the automated typesetting program ‘TEX’ that was first developed in 1974, provides the book’s unusual text formation, evident in the alternate visual presentation of its title, ‘THE * AS ERROR’.

The presence of the sun runs throughout the book - as conceptual entity and as natural phenomenon. Whether presented as symbol or with its trajectories of light traced in the photographic, Ebner implicates the sun’s centrality to our reading of the visual world.

Shannon Ebner
The sun as error