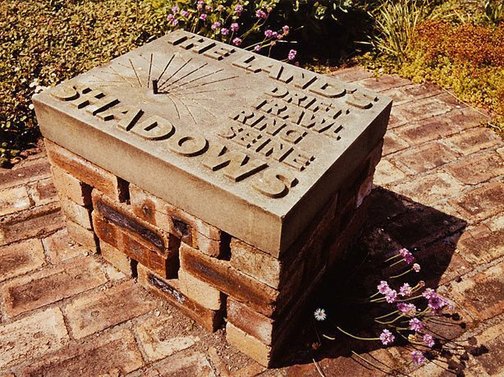 Located on a once desolate moor in Pentland Hills, south of Edinburgh in Scotland, ‘Stonypath’ is both a conceptual work of art and widely recognised as one of Europe’s greatest modern gardens. In 1966 when Scottish artist Ian Hamilton Finlay and wife Sue moved to the property they began a process of transformation by making ponds and planting trees and other flora. From time to time Finlay created artworks collaboratively with stone masons, engravers and others which were set among the landscaped grounds. This series of photographs by David Paterson reveals some of the 275 individual artworks at ‘Stonypath’ including neoclassical statues, architectural fragments, sundials, temples and stone plaques, many engraved with English and Latin words or phrases. Highly regarded as a concrete poet (in which the visual appearance and combination of words is as important as their content and effect), the creation of ‘Stonypath’ enabled Finlay to work physically with the form of words, a process sometimes referred to as environmental poetry. Finlay chose names, phrases and titles that drew from themes which have dominated his work, including the French Revolution, the classical world, war, fishing boats, landscape and philosophy. Despite his serious intent, some of the expressions are humorous (a tablet inscribed with ‘Bring Back the Birch’ placed next to maple trees). Other artworks are deferential including the French painter Claude Lorrain’s signature engraved on the side of a bridge which crosses over a picturesque pond.

Finlay’s concern for the structures of modern society is based in historical antecedents. In the garden are references to the philosopher of nature Jean-Jacques Rousseau and the engraved signature of French painter Nicolas Poussin, among others; symbols of time passing; and weighty dialectical aphorisms, for example ‘The Present Order is the Disorder of the Future’ by Saint-Just, the 18th-century French revolutionary leader. Each word from this prophetic quote is inscribed on a single stone block. As with most sculpture at Stonypath, the work was produced collaboratively, in this instance with Nicholas Sloan. Saint-Just’s phrase and ‘Stonypath’ refer to the cyclic character of chaos and order in society, culture and in humanity’s relationship with nature. Here, philosophical ruminations in the form of sculpture are situated within a growing and living garden that constantly threatens to become overgrown, paradoxically denying order and stability. It is therefore fitting that after a property tax feud with the local council over the religious status of one of the buildings, Finlay renamed ‘Stonypath’, ‘Little Sparta’. Sparta was the ancient enemy of Athens; consequently the new name conveys the adversarial relationship between Finlay and the local bureaucracies. Real and imagined battles take place in his garden, where objects paying homage to cultural events and activities exist in rapport with nature.

Stephen Bann, The British show, 'Ian Hamilton Finlay', pg. 67-70, Sydney, 1985, 67-70. This catalogue contains illustrations of works from the Stony Path series but none of the works in the AGNSW's collection.