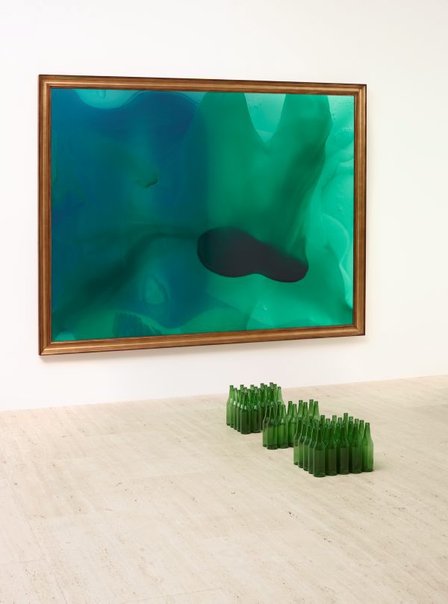 Dale Frank is a conceptual painter whose art making has also encompassed drawing, social sculpture, situational performance, installation, photography, and video, throughout his thirty year career. Frank's multifaceted practice can only be defined by his challenging of the connotation 'art', and is best summarised in his statement: 'All definitions are dangerous, even this one. But, the golden rule is that there are no golden rules. And, every exit is an entry to somewhere else...' (Dale Frank, New paintings, Realities Gallery, Melbourne, 1988, n.p.). As an artist who emerged during the so-called crisis in painting during the 1970s and 1980s Frank is aware of, and is able to exploit the limitations and potential of the medium, recently proclaiming that it 'does not take its own legitimacy for granted' (Dale Frank, Dale Frank - Toby jugs, Roslyn Oxley9 Gallery, Sydney, 2014, n.p.).

From the mid 1990s onward Frank has developed an experimental - and performative - process based upon the pouring, pooling, dripping, bleeding, and setting, of monochromatic varnishes, enamels and resins on supports laid flat, a technique historian Jane Morgan has noted is foregrounded in Australian art by Ralph Balson's abstract 'Matter paintings' of the early 1960s. These paintings have a life of their own; their textual and changing surfaces addressing cerebral and corporeal concerns with and beyond gesture and form, particularly the exchange between audience, space, and time.

Frank's 'Ambition 25 + regrets 10 + death 21 = 56' 2014 is a hybrid work comprising of a large framed sheet of plexiglass mirror that has been layered with mesmerising blobs and swirls of chemical green varnish, its fluidity recalling psychological as well as astral landscapes. Reflective images of the viewer and their surroundings have also been superimposed on the picture plane, appearing as an experiential self-portrait of here and now. Displayed on the floor in front is a sculptural component comprising of 56 glass bottles aligned with 21 twenty cent coins placed atop. This is possibly a reference to the drinking/ youth culture explored in the artist's staged pool hall and disco encounters of the mid to late 1990s.

'Ambition 25 + regrets 10 + death 21 = 56' can be appreciated formally at 'face value', but as with all Frank's artworks their irreverent , and often surreal titles, are another point of entry toward understanding them. 'Ambition 25 + regrets 10 + death 21 = 56' is a formula calculating the sum of a lifetime's hopes, achievements, and disappointments, that equate to the artist's age at the time of making, which is further represented by the quantity of objects. It could therefore be interpreted as a memento mori (or satire of), the art historical tradition of the creator reflecting (literally in this case) upon mortality, their profession, and legacy, up until this point, with us.

varnish on plexiglass with 56 green bottles and 21 coins