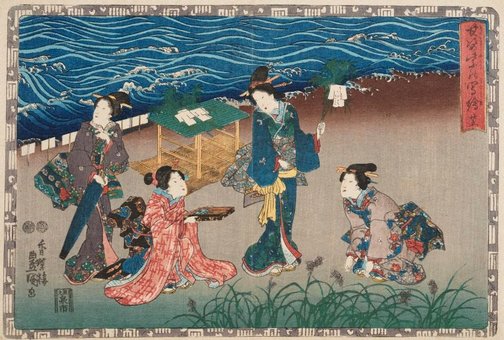 The red title cartouche identifies this depiction of a group of four ladies carrying out a Shintoist ceremony on the seashore as an illustration of chapter 25 of the ‘Tale of Genji’. However, the depicted scene does not correspond to any of the events in this chapter. Also, it doesn’t seem to refer to the Edo period parody of the classic tale, ‘A false Murasaki’s Rustic Genji’ ('Nise Murasaki Inaka Genji') by Ryūtei Tanehiko with illustrations by Utagawa Kunisada. Comprising 55 prints (one design for each chapter plus a title page), the series ‘Faithful depictions of the figure of the Shining Prince’ was designed between 1851 and 1853. As such it belongs to the earlier Genji series by Kunisada, who held the monopoly in the production of printed Genji illustrations in the 1850s and ‘60s, having designed over a thousand prints on this subject. While Kunisada adopted the traditional iconography as established by artists of the Tosa School for painted Genji pictures (Genji-e) or those invented by himself for the serial novel ‘Inaka Genji’ on some sheets in this series, there is also a group of prints that show a complete new iconography like this sheet.