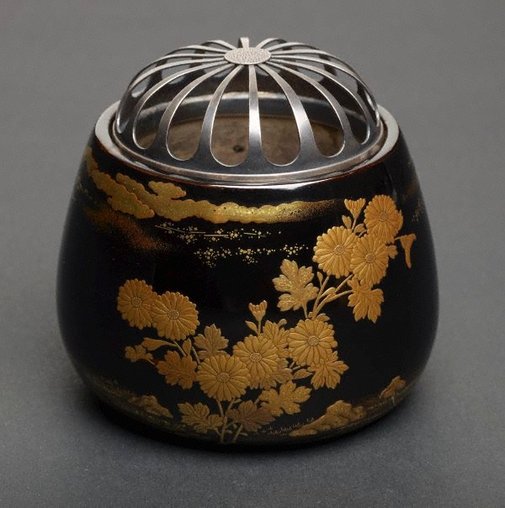 A lacquer incense burner of elegant proportions, silver lined with a pierced silver top. On a rich and lustrous 'roiro' ground are seen sprays of chrysanthemum depicted in gold 'takamakie' with details in 'kirikane' and 'keuchi'. The flowers sprout from amongst rocks and grasses in the foreground and clouds of 'nashiji' and 'kirikane' drift in the sky. The motif of the chrysanthemum is repeated in the pierced lid which is in the form of a chrysanthemum flower, the centre is the stamen from which the individual petals radiate.

Incense burners were traditionally used as part of the incense game and as an implement for the tea ceremony. Technical prowess in lacquer works was at its highest during the Meiji period and this piece, in its technical execution and in the restrained elegance of its design, represents the best of Meiji lacquer. Being a piece for the tea ceremony, it is unsigned.

The chrysanthemum flower is a symbol of autumn and is said to preserve health and to prolong life. The flowers were used in tea and often floated in wine. Chrysanthemum sake was served at banquets. The open petals of the flower, as depicted in the lid of this piece, are said to represent the rays of the sun and as such a stylised chrysanthemum was adopted as the Imperial crest.