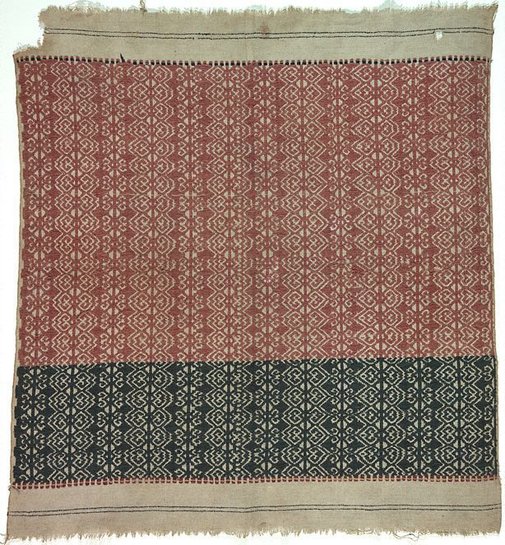 The most common of the Indonesian “ship cloths” are the tampan, which are small cloths (approximately thirty to 100 centimetres per side) woven in plain weave of undyed cotton and decorated with supplementary weft yarns of dyed cotton or silk. Although ship motifs predominate, other popular designs include mythical birds and creatures, horse and rider motifs, and abstract interlocking and repeated patterns. 'Tampans', as with other, larger ship cloths, were important in various ceremonial and life-cycle contexts, and were particularly used during rituals associated with life transitions such as birth, circumcision, naming, initiation, marriage, and death. During these events, the tampans functioned as food wrappers, seat cloths, gifts, and ceremonial hangings. Many tampans exist because they were given away in great numbers during ritual ceremonies to mark events and to connect lineages through instances of reciprocal exchange. A family’s rank was demonstrated by the number of tampans that it was allowed to display publicly. Rank came from the number of connections that a family had with other families.

Images of humans, animals, ships with high prows, and buildings appear with varying levels of realism. Key and spiral details are important as borders and space fillers. Red colour was the most usual, but the Liwa and Kota Agung region commonly used red, blue, and yellow. The base fabric of the tampans is cotton and it is woven in a plain weave. The designs are produced with supplementary (extra) weft threads that are inserted during the weaving process. In the Liwa region, the supplementary yarns were silk produced by the local industry.