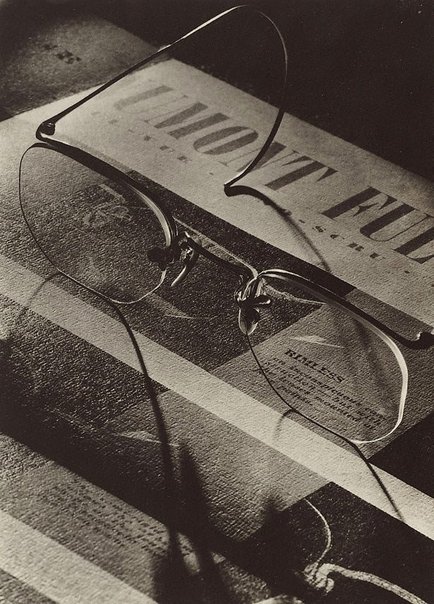 Hans Hasenpflug arrived in Australia in 1927 aged 20. He had been born into an educated Stuttgart family but it does not appear that he became involved in photography until 1932 when he was employed by Leica Photo Service in Sydney. Hasenpflug went on to work for Russell Roberts from 1935 to 1937 before moving to Melbourne and working with Athol Shmith and other Melbourne studios from 1937 to 1942. As an enemy alien Hasenpflug was not allowed to work on industrial assignments during the war but he was not interned and was naturalised in 1945. Hasenpflug exhibited in the salons in the 1930s and his work appeared in the ‘Sydney Morning Herald’, ‘Australian Woman's Weekly’ and the ‘Sunday Telegraph’. In 1947 ‘Australian photography’ published four of his photographs of which ‘Glasses’ was one.1

Hasenpflug was clearly a versatile advertising photographer. He specialised in fashion and product advertising and some portraiture2 and, despite his apparent lack of photographic training until the 1930s, in Australia he seems to be have been more clearly influenced by European new photography than most of his Australian peers. Many of his photographs, regardless of genre or subject matter, depend on diagonals through the picture plane and raking light. ‘Glasses’ is no exception. The rimless spectacles sit neatly on a brochure advertising their features. The diagonal placement of the glasses is emphasised by the bands of light in the brochure design and one lens sits over the ‘rimless’ descriptive text. The curve of the spectacle frame leads the eye up to the top centre of the image and then back down again. The composition is elegant and, in comparison to Olive Cotton’s ‘Glasses’ c1937 (AGNSW collection), is not dramatic. Hasenpflug had to please a client whereas Cotton was probably pleasing herself.

Browse other works by Hans Hasenpflug