Six scenes from ‘The Tale of Genji’ 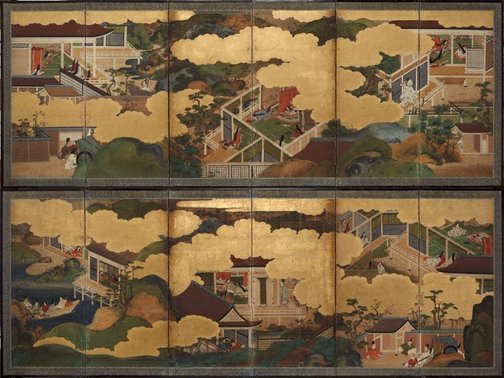 The scenes in these screens are read from right to left and begin with an episode from Chapter 6 in the 'Tale of Genji', when Prince Genji steals into the mansion of Princess Suetsumuhana and listens to her playing the Japanese zither called koto. The central vignette represents Chapter 21. It shows the page girl sent by Empress Akikonomu carrying a box of autumn leaves and poem for Murasaki, Genji's main consort. The final scene depicts Genji peering over a brush fence at the young Murasaki, a common motif to illustrate Chapter 5.

The first scene in the left screen represents Chapter 23 and shows Genji paying his New Year’s visit to the Akashi lady in her elegantly appointed quarters. The vignette at the centre refers to Chapter 3. It portrays two young women playing the board game of go, unaware that they are being watched by Genji. The last two panels on the right border show Genji's son Kaoru courting the ladies of Uji; this refers to developments in Chapter 46.

Tosa School
Six scenes from ‘The Tale of Genji’

Browse other works by Tosa School