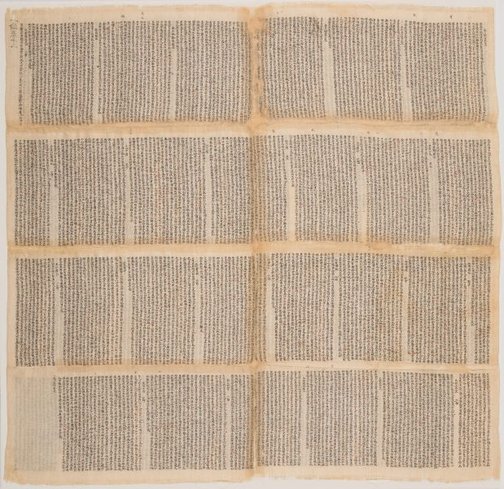 The examination system in China, known as 'keju', existed from around 606 to 1905. Passing the examinations was of great importance. Success in them was seen as the only path to obtaining a professional, high-ranking official’s position in the imperial government, and along with it the associated prestige, power and financial gains. The highest and most desired level was that of 'jinshi' (advanced scholar). Some exams lasted a day, while others could take up to nine. Students were tested on numerous subjects, including the Confucian classics and history known as the ‘Four books and five classics’ (Sishu wujing), poems and policy. Each component of the exams had rigid rules that were strictly adhered to.

Cheat's handkerchiefs or sheets were used as secret aids in the examination and their surfaces were crammed with as much text as possible. They could be found hidden, folded or rolled up in a different places, such as in the lining of clothing, in pockets as small handkerchiefs, in shoes, bread, pens, inkstone bases and carrying cases. On occasion invisible ink was employed. Sometimes collaborators would tie sheets to rocks that were thrown into the examination compound or attach sheets to carrier pigeons.

Gift of Judith and Ken Rutherford 2008