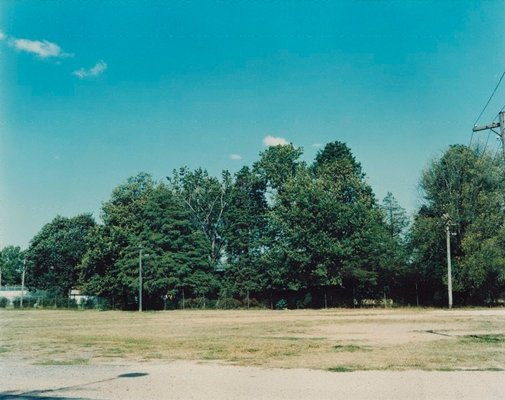 Ian North is an Adjunct Professor of Visual Arts at both the University of Adelaide and the University of South Australia. He is a photographer, painter and writer, and was the founding curator of photography at the National Gallery of Australia 1980 -1984. Throughout his career, he has been concerned with the legacy of Australian landscape, the impact of colonial narratives and their established visual conventions and, as a consequence, the politics of representing the subject.

‘Pseudo Panorama. Cazneaux series’ examines the emblematic history of landscape imagery in Australia. Reappropriating a Hans Heysen painting and a Harold Cazneaux photograph, North demonstrates how pictorialist artists idealised the bush as urban refuge and nationalist reverie – attempting to create an identity outside of European values. By juxtaposing two media, North analyses the processes of making images and icons. His title highlights the work’s irony, that Heysen’s and Cazneaux’s project of self-determination inadvertently projected European aesthetics and paradigms onto the Australian landscape. In discussing North’s related ‘Australia’ series, Lee Marks and Gerald Lang recognised North’s self-conscious reflection on the historical precedents that inspire an artist’s intentions, and that equalising photography and painting in a single work ‘create[s] tension’[1].

North’s methodology is concerned with the processes of vision and interaction as they have shaped the landscape. In ‘Canberra Suite’ North presents an encyclopaedic record of Walter Burley Griffin’s intricately designed city, exploring the spatial interface between nature and humanity. The works are absent of human life – reminiscent of Ed Ruscha’s ‘Twenty-six Gasoline Stations’. The emotional ambivalence of the images is reflected in their use of colour, like that of postcards. As one of the first instances of larger format colour art photography in Australia, the images topographically map space as a depersonalised, banal subject. Yet their colour, like that of landscape painting, highlights flora, revealing the number of non-native plants included in Canberra’s design. As such, these artefacts of North’s private wanderings and systemic mode of looking are able to subtly critique colonialism.

Browse other works by Ian North