Study for 'The fortress' 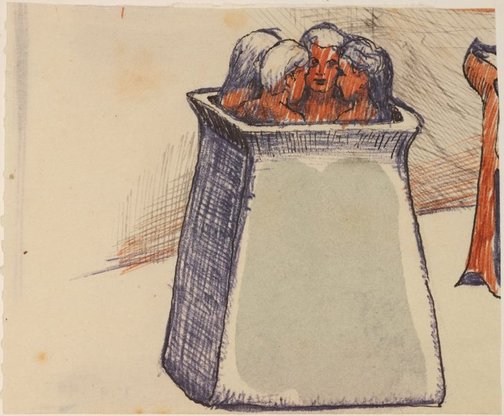 Gleeson first conceived this distinctively shaped vessel after reading about burial customs in Sir Thomas Browne's 'Hydriotaphia Urn-Burial; or, a Discourse of the Sepulchral Urns Lately Found in Norfolk' 1658. The urn occurs in a number of paintings, including 'The fortress' 1949, 'Flight' 1950; there is also an oil study for 'Flight' in the collection, and 'The trap 2' 1971.

Gleeson described the urn in 'Flight' as representing an entry into Hell. Alongside the steps leading to the urn a number of skulls in bark shelters mark the way. Also influential was the existentialist one-act play 'No exit' by French philosopher Jean Paul Sartre (1905-80) first performed in 1944, in which the three principal characters find themselves in Hell.

James Gleeson
Study for 'The fortress'