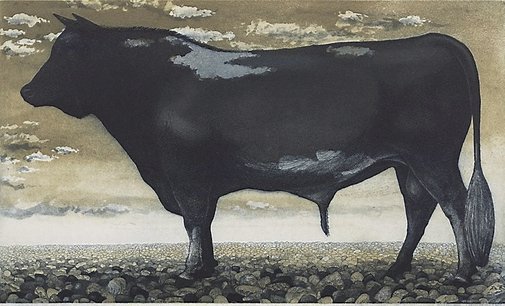 Michael Kempson trained in Sydney at Alexander Mackie CAE 1980-81, City Art Institute 1982-83, Sydney CAE 86-87, and COFA 1992-96. He is Senior Lecturer and Co-ordinator of Printmaking Studies at COFA and Director of Cicada Press at the University of New South Wales. Kempson’s work sources a range of material using personal experience, frequently articulated through oblique forms. In the work offered here, 'Regret', he situates a large bull amidst a rocky 'desert' - an absurd context for such a creature and characteristic of the artist’s dry wit. The image is self-referential and has a more sombre underlying theme however, since it arose towards the end of a long relationship when he himself felt unable to function in unfamiliar terrain.

Browse other works by Michael Kempson