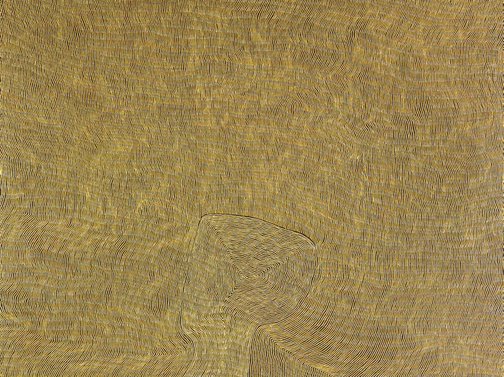 Yukultji Napangati came to Kiwirrkura, WA in 1984. Prior to this she had been living with eight members of her immediate family in an area of country to the west of Wilkinkarra (Lake Mackay). The group had remained in the Great Sandy Desert long after all other Pintupi families had moved to the government settlements of Ikuntji (Haasts Bluff), Papunya and Wirrimanu (Balgo).

Napangati began painting for Papunya Tula Artists in 1996. In 1999 she contributed to the Kiwirrkura women's painting as part of the Western Desert Dialysis Appeal, and in 2005 she was selected as one of nine artists to exhibit in Primavera at the Museum of Contemporary Art, Sydney. Napangati is among the generation of female artists from Kiwirrkura, who have revolutionised Western Desert art, creating works of refined minimalism, such as 'Untitled' 2013. This work refers to the Yunala (bush potato) with the undulating lines representing both the sandhills surrounding the site and the underground tubers of the yunala.

The Papunya Tula documentation for this work states: This painting depicts designs associated with Yunala, a rockhole and soakage water site situated among sandhills just to the west of the Kiwirrkura community in Western Australia. During ancestral times a group of women camped at this site after travelling from further west. While at YUnala the women camped beside the rockhole, digging for the edible roots of the bush banana or silky pear vine (Marsdenia australis), also known as yunala. The lines in the work represent both the sandhills surrounding the site as well as the yunala tubers underground. The women later continued their travels towards the east, passing through Marrapinti, Ngaminya and Wirrulnga on their way to Wilkinkarra (Lake Mackay).