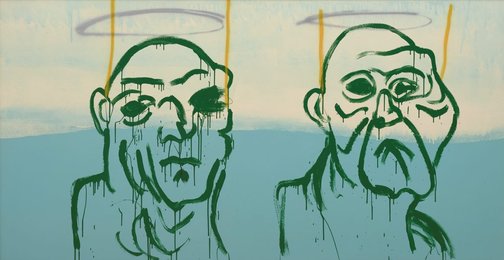 Adam Cullen’s expressive and satirical paintings are a form of social allegory, recording a cutting portrait of our national psyche caught in a suspended stage of development. Cullen’s visual language and references are relentlessly local, even parochial, as his work encapsulates a particular experience of contemporary Australian life. Our pride in being a ‘young nation’, our admiration for the antihero, our obsession with the vernacular and our insistence on doing it our way, can also leave us trapped in a perpetual and self-consciously puerile adolescence. Cullen’s bad faith with the information that shapes our selves and our nation is seemingly mirrored in a bad faith in the role of the artist and in painting itself. While Cullen may point to what he sees as being adrift in our society, he also replicates these same traits in his work. This is not satire with a redemptive intent.

‘Australian saints’ is a portrait of two old men from Cullen’s ex-local pub in the inner-Sydney suburb of Pyrmont. They are the sort of men who prop up the bar and have an opinion on everything as they get increasingly drunk, until they are too pissed to do anything but stagger home or pass out on the way. Their halos are supported by what could be horns; god and the devil are intertwined in the ambivalence of this imagery. They could also be antennae broadcasting and receiving whatever it is that old men in pubs broadcast and receive. They are both a national archetype and symbolic of a form of limited and limiting masculinity. ‘Let’s get lost’ was the title of a song by jazz musician Chet Baker, the bohemian ideal of generational disenfranchisement before Baker descended into heroin addiction and a premature death. Cullen’s work seems to suggest that we are already lost; ‘Let’s get found’ would perhaps be a more radical statement. It has all the banality and predictability of teenage angst and yet also suggests the very real depression and frustration that underlie the sense of helplessness behind Australia’s horrific male suicide statistics, both in the cities and beyond the black stump.

‘Anything I say or do’ 2001 (AGNSW collection) combines the leering imagery of a psychotic clown’s head, decapitated female body and a sheep among other images. Text runs down the painting, pointing to a collective paranoia: ‘A corrective service’, ‘Anything I say or do will be used against you’ and to failed nationalisms ‘Still born still in born Australia’. The latter phrase suggests being born, being born dead and the pathos of Bruce Springsteen’s song ‘Born in the USA’, which is critical of both the Vietnam War and the treatment of veterans but which has been used in American political rallies as a jingoistic anthem. Cullen is not just channelling material; he is firmly in control of his artistic repertoire and the corrosive expressive power of his visual language of attenuated forms, headless torsos, isolated figures and carefully placed text.

synthetic polymer paint, ink and enamel on board

Browse other works by Adam Cullen