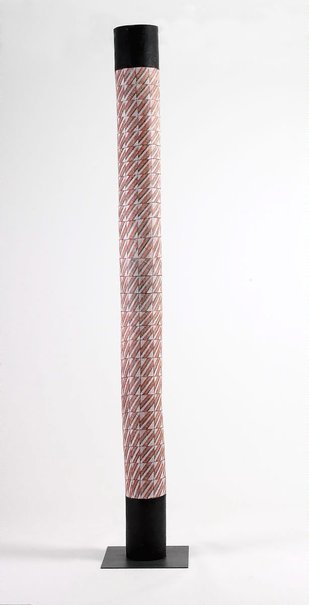 Lorrkkon or Hollow Log Coffins are used to inter the bones of deceased people where traditionally the log is transformed into a ritually powerful container through singing and being painted with Ancestral figures. Timothy Wulanjbirr's 'Lorrkkon' 2003 is a secular version, not intended for ceremonial purposes. In the documentation for 'Lorrkkon' 2003 Maningrida Arts & Culture state: "The Lorrkkon or bone pole coffin ceremony was the final ceremony in a sequence of mortuary rituals celebrated by people of Arnhem Land. This ceremony involves the placing of the deceased's bones into a hollow log which is decorated with painted clan designs and ceremonially placed into the ground where it remains until it slowly decays over many years".

The log is made from a termite hollowed Stringybark tree (Eucalyptus tetradonta) and is decorated with totemic emblems.

The western Arnhem Land version of the Lorrkkon ceremony involves the singing of sacred songs to the accompaniment of karlikarli, a pair of sacred boomerangs used as rhythm instruments.

During the final evening of the ceremony dancers decorate themselves with kapok down, or today cotton wool and conduct much of the final segments of the ceremony in the secrecy of a restricted men's camp. The complete ceremony may stretch over a period of two weeks but on the last night the bones of the deceased which have been kept in a bark container, or today wrapped in cloth and kept in a suitcase, are taken out, are painted with red ochre and placed inside the hollow log. This ceremony may take place many years after the person has died.

At first light on the final morning of the Lorrkkon ceremony, the men appear, coming out of their secret bush camp carrying the pole towards the women's camp. The two groups call out to each other using distinct ceremonial calls. The women have prepared a hole for the pole to be placed into and when it is stood upright, women in particular kinship relationships to the deceased dance around the pole in a jumping/shuffling motion. The Lorrkkon is then often covered with a tarpaulin and left to slowly decay.

'Lorrkkon' 2003 by Timothy Wulanjbirr is a phenomenal exercise in precision and control which is characteristic of much of his painting on bark. Painting on the curved surface of the log displays Wulanjbirr's skill in the technical aspects of painting while the overall grid and cross-hatched design are excellent examples of his conceptual ability and aesthetic judgement.

Timothy Wulanjbirr is a Kuninjku bark painter and sculptor. An emerging artist who is following John Mawurndjul's path in making intricate and complex compositions that almost disappear under the rarrk designs. In 1999 his work was exhibited in 'Spirit Country' (San Francisco) and is held in national public collections.