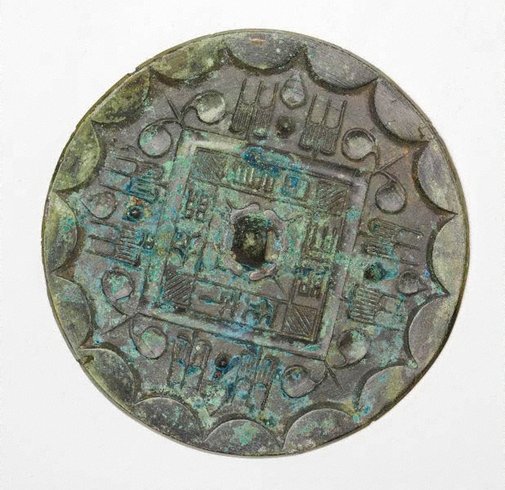 Chinese bronze mirrors are generally thin circular discs, slightly convex on the polished reflecting side and decorated with cast designs of a symbolic nature on the reverse. A small loop or pierced dome at the centre of the reversed side was used to attach a cord. The earliest known mirrors date from at least the Western Zhou period (900s-800s BCE) but it was during the Han and Tang dynasties that large numbers of highly ornamented mirrors were produced. Their reflective function made them a vehicle for the expression of a fascinating range of mythological and cosmological ideas and beliefs.

The distinctive 'caoye', or grass and leaf, pattern is defined by the symmetrical motif resembling an ear of corn and the trefoil forms which appear on the main ground of the mirror around the central square. An inscription cast into the square band reads: 'jianri zhiming, tianxia daming' (may you see the light of the sun and may the world enjoy great lightness), suggesting that the design symbolises a form of cosmological harmony.