The marriage of the Arnolfini - after van Eyck 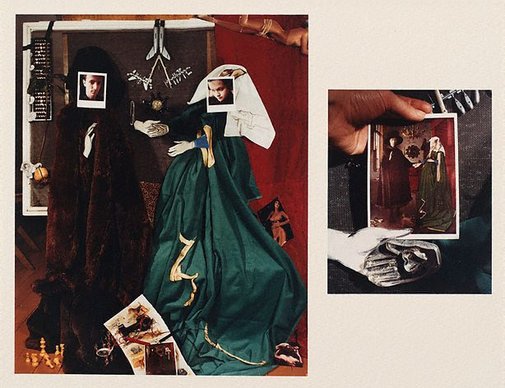 In 1980 Fiona Hall’s work underwent a shift, although for her it was: ‘a gradual revelation … it was more about returning to a space in the history of art, as constructed by other artists. It’s difficult to go back and talk about the shift as being a revelation because it happened over a period of time … if one could talk about an extended revelation, yes it has been revelatory, an exploration of what one could say in the studio and taking it further and further.1

Hall produced a series of works in colour where she examined, in the form of diptychs, iconic images from the history of art, including those by Paul Cézanne, Henri Matisse, Piet Mondrian and Jan van Eyck. Hall’s reconstructions are akin to examinations within examinations as reproductions of the original masterpiece sit within her mediations on it. Unlike a series of Chinese boxes or Russian dolls the final work is a puzzle where all the extrapolations lead to more interpretative possibilities. As Kate Davidson has written: ‘These associations are not a matter of chance: like theatre props, the unorthodox materials were consciously selected and arranged. Collectively they function as diagrammatic representations of pictorial elements and undermine, at the same time revitalise, conventional perceptions of the famous works they mimic.2

Fiona Hall
The marriage of the Arnolfini - after van Eyck