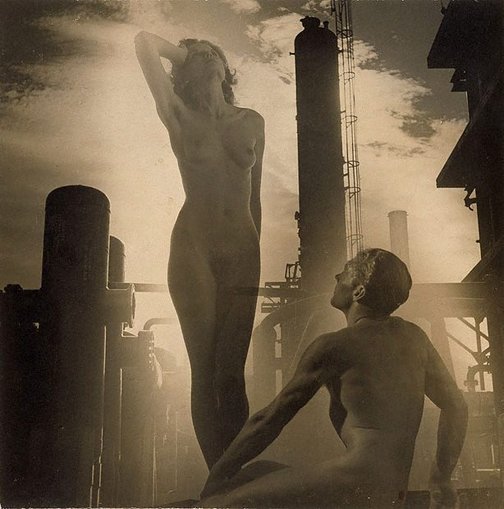 Laurence Le Guay started his photographic career with Dayne Studios in 1935 at the age of 18. In 1938 he was invited to join the Contemporary Camera Groupe which included Max Dupain and Olive Cotton, as well as several older photographers including Harold Cazneaux and Cecil Bostock. The Groupe was committed to practising and promoting a modern Australian approach to photography. Le Guay, like Dupain and other members, was interested in European modernism and wanted to find a way to use this style to create uniquely Australian images.

‘The progenitors’ is one of a series of montage works that Le Guay produced on the theme of modernism and the human condition. In the image, the nude man and woman are positioned as massive figures within an industrial landscape. The woman looks skyward with one hand pressed to her temple, while the man is seated at her feet and gazes up at her and the factory towers. The pose of the woman echoes the towers of the factory behind her, while the light and cloud suggest the enlightenment of the industrial world. The implication is that the couple are a modern Adam and Eve, with their ability to produce a new Australian race intrinsically linked to the productive capabilities of the modern industrial machines behind them. As Isobel Crombie has written:
The title of Le Guay’s work potently suggests the complex mix of issues regarding race, heredity and modernity that circulated during the 1930s … A progenitor can mean a spiritual, political or intellectual predecessor and, in this context, the couple offer the viewer the reassuring promise of future prosperity.1

Judy Annear and Daniel Mudie Cunningham, The Image of Man, Sydney, 1997. no pagination or catalogue numbers