Towards the light XII 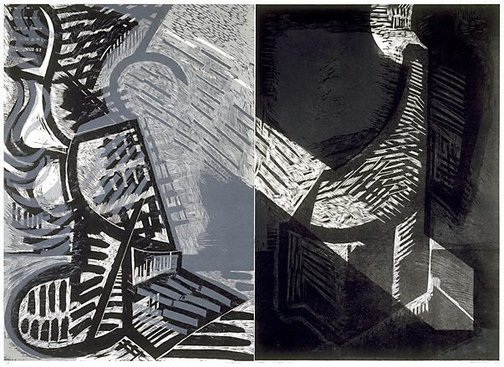 Jennifer Marshall was born in Adelaide and studied painting at the South Australian School of Art 1959-62 and etching under Karin Schepers and Udo Sellbach in 1963. In 1976 she was awarded a Bachelor of Arts (Hons) from the University of Sydney and in 1994 a Master of Arts from Monash University. She was Senior Lecturer and Head of the Printmaking Department at Sydney College of the Arts 1982-89, and has also taught in Glasgow, Tasmania, Victoria and Canberra. Marshall has exhibited in group exhibitions since 1961 and held solo exhibitions since 1975.

In 1992 Marshall began work on a proposed artist's book, from which emerged a series of prints titled 'Towards the light'. Two early Italian paintings, Duccio's 'The Annunciation' (1311) and Simone Martini's 'The Annunciation, St Ansanus and St Margaret (?), the Prophets Jeremiah, Ezekiel, Isiah and Daniel' (1333) were integral to this work.

"I wanted to expore some of the formal pictorial conventions evident in these two paintings. To make the two halves of the picture work both together and yet read as separately existing in their own space. Also the representation of light, the light of heaven, illuminating the darkness".

She made a number of prints, including lithographs in the series, which culminated in 'Towards the light XII'.

Jennifer Marshall
Towards the light XII

Browse other works by Jennifer Marshall