Landscape, between the Counties of Morbihan and Finistère 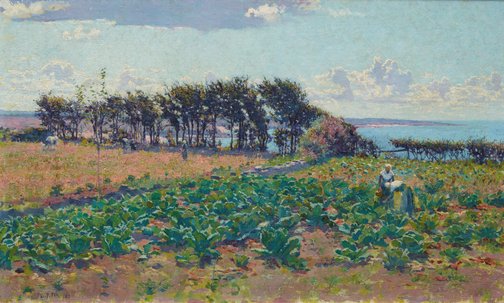 By the late 19th century, as Australian artists turned with increasing attention to painting the distinctions of their sun-drenched landscapes, many looked to the Impressionist movement that had developed in France, to inspire their own efforts in evoking place. Fuelled by the French avant-garde’s experimental approach to expressing the sensations of light and colour, Australian artists connected with a radical new means for imagining their own world.

Like others of his Australian-born colleagues, Emanuel Phillips Fox, a student of the National Gallery School, Melbourne from 1878 to 1886 had demonstrated early talent, had his sights set of Paris to further his training. He arrived in 1887, immersing himself in the art of the city and setting a gruelling training schedule at various Parisian ateliers between 1887 and 1889. He followed the pattern of Paris’ artistic populous who retreated to the French coastline to paint in the summer months.

In 1889, Fox spent the summer months in Brittany and produced some of his most inspired paintings that represent the culmination of his artistic experiences of France. Amongst these is his dazzling Impressionist landscape Landscape, between the Counties of Morbihan and Finistère 1889. Like other artists painting in this region, Fox was interested in depicting local peasant life, but it is the luminosity in his evocation of this water-bound landscape that becomes the true subject of this painting. The overwhelming feeling that “the atmosphere vibrates with sunlight”, as noted by a reviewer of the work in 1892 when it was first exhibited in Melbourne, still holds true when viewing the painting today. The brilliant expanse of an opalescent palette and the criss-crossing build-up of speckled brushwork creates a shimmering surface of palpitating colour and makes for one of Fox’s great Impressionist masterpieces.

Fox’s Impressionist-inspired works would redefine his approach to painting the landscape when back in Australia. Accomplished paintings such as Landscape, between the Counties of Morbihan and Finistère, which is revealing of the artist’s great capacity for a vibrant, and sensuous colour expression would also inspire subsequent generations of Australian painters.

Landscape, between the Counties of Morbihan and Finisterre

E Phillips Fox
Landscape, between the Counties of Morbihan and Finistère

Maurice Brodzky (Editor), Table Talk, 'An Australian Artist. - Mr. E. P. Fox and his Pictures', pg. 4, Melbourne, 09 Dec 1892, 4. A landscape near Morbihan, in Brittany, contains a great deal of sterling work.The perspective is good, the cabbages in the foreground excellent, the sky soft and luminous, but the trees in the background are a little too scrumbly.

By A. COLQUHOUN, The Herald, 'PHILLIPS FOX PORTRAITS SHOW FINE CRAFTSMANSHIP - SUNLIGHT EFFECTS ATTRACT', pg. 3, Melbourne, 26 Feb 1916, 3. Australian landscape, is in marked contrast to "The Cabbage Garden," painted in France at a later date, and portraying an effect of sunlight, expressed with a brilliant and acceptable literalness which the artist adopted in dealing with certain aspects of nature, and which is much in evidence in his landscape.

Esmond George, The Mail, 'Fascinating display of early Australian art', pg. 14, Adelaide, 15 Oct 1949, 14. His own development may be traced by a comparative study of his early and later works. "Cabbage Patch, France", earliest of those shown is indicative of his subsequent development, not only in formal realisation but to an even greater extent in colour harmonies.

A.L. Windsor, Age, 'MR. FOX'S EXHIBITION OF PAINTINGS.', pg. 6, Melbourne, 06 Dec 1892, 6. The landscapes between Morbihan and Finistere, which depicts a field of cabbages, in which two women are at work, bordered by a straggling row of trees, with the sea beyond, all in the strong light of the morning sun, is painted with wonderous relief and vigor, and the atmosphere vibrates with sunlight. It is characteristic of Mr. Fox's work that all he does is well done.

Editor Unknown (Editor), Argus, 'Mr E. P. Fox's Exhibition', pg. 7, Melbourne, 06 Dec 1892, 7. ... a scene between Morbihan and Finisterre, where the artist's aim appears to have been to convey a sense of light and air and of local colour as affected by both, with no more definition than might be necessary in order to convey a general idea of the form of the principal objects depicted.