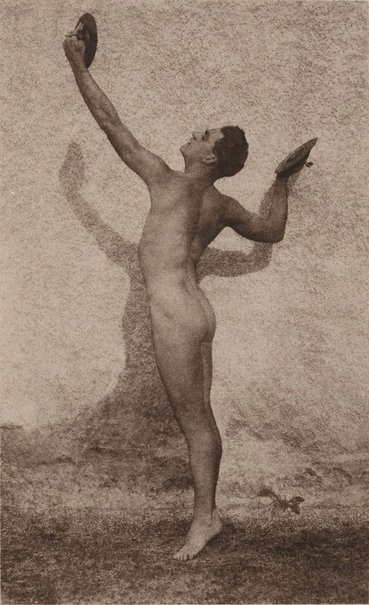 ‘If you do everything in the manner it should be done you would be perfection, but uninteresting. However, we will never meet you, for we are all human, and being so, we all must stray a little now and then, especially in picture-making, where there is no fear of physical punishment.’ Douglas Hill 1925 1

Douglas Ralley Hill was born in Balmain, Sydney.2 Fellow photographer Henri Mallard remembered: ‘He specialised in small-sized work and seldom made a print larger than the whole plate, his chosen medium being the enlarged paper negative process. His favourite subjects were figure studies. Very frequently these were nude studies of the male subject and some of his torso prints of youths in athletic poses will be long remembered by many of his associates who derived much pleasure from viewing them.’3 Hill was an active member of the Sydney Camera Circle and the Photographic Society of New South Wales and regularly contributed articles to photographic journals.

Writing about depictions of the male nude at the beginning of the 21st century is fraught with difficulties, as one ventures into a realm of critical dialogue currently dominated by queer and gender politics and Freudian and Jungian psychology. Whether these frameworks can tell us as much about the 1920s world which produced ‘Youth’ as they do about ourselves is questionable. This image suggests a fragment from an art-deco frieze. In fact, Hill used the same model with his cymbals, this time semi-clad and cropped from the waist down, for another work entitled ‘Processional’.4 In currency during the 1920s were various vitalist philosophies which believed Australia could become a ‘new Greece’, along with practical back-to-nature movements and the beginning of a body-shaping industry which has reached its apogee in modern times. Hill, like other artists of the time, was also interested in the formal qualities of the nude body and the expressiveness of gestures.