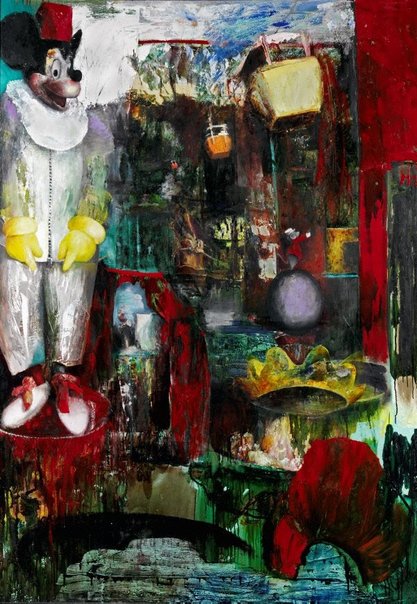 Early works such as ‘Fruitful corsage, bridal bouquet, lingering veils’ 1983, exhibited in Australian Perspecta 1983, have a deliberately feminine sensibility and subject matter as they both draw on, and mark a departure from, the ‘central core’ imagery of 1970s feminist artists. In this work the thickly painted accoutrements of a dressing table are sexually charged. Resembling fetish objects and genitalia, they also seem to suggest a decaying moment in time, reminiscent of Miss Haversham’s wedding breakfast. By the later 1980s Norrie drew more directly on both historical paintings and on pop culture. ‘Fête’ 1986, which won Norrie the inaugural Moët & Chandon art award in 1987, has a surfeit of imagery but most prominent is the Mickey Mouse figure in a Pierrot’s costume, recalling Watteau’s famous ‘Pierrot’ of 1718/19. The commercialisation of culture, entertainment and leisure seemed the subject of this layered and ambiguous painting.

‘Untitled’ from the series ‘Peripherique’ came out of the Moët & Chandon residency Norrie undertook in France. The series title is the name of the ring road that encircles Paris, a confusing road marked by innumerable signs to potential destinations. In Norrie’s painting the word ‘debit’ is repeated again and again in differing scales, emerging from and submerging into the deeply varnished, darkly toned layers of paint. The elaborate copper-plate writing recalls the text of historic documents but is actually derived from Hallmark greeting cards. The word debit suggests loss, owing, debt; of paying your dues. It perhaps refers to the debt of artists to the past, but also of course to financial credit (another painting in this series had the word ‘credit’ repeated across it) and debt that structure contemporary living and have become even more pervasive since this painting was finished. Repeated with this much attention and scale, the word ‘debit’ seems to imply a central lack in this societal structure that is far greater than just economic.

A sense of the gothic and an affinity with death pervade many of Norrie’s paintings. In ‘Model seven’ from the series ‘Room for error’ Norrie has repeated a recipe for embalming fluid found in a house-hold book from 1926, ‘Henley’s formulas for home and workshop’. Each panel is coloured to refer to bodily fluids and the sticky surface (like ‘Untitled’ from the series ‘Peripherique’) implies decay and corruption. In the early 1990s Norrie broadened her conceptual enterprise to include sculpture, installation, moving images and sound. Her subsequent installations using both found film and original video are among her most impressive works to date. 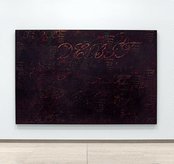