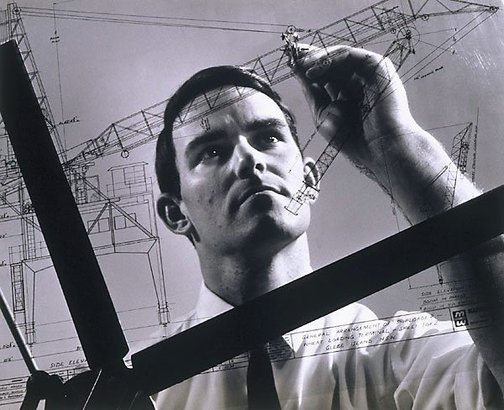 Wolfgang Sievers was born in 1913 in Germany during the Weimar Republic, developing an early knowledge of photography, art and architecture in this period of artistic freedom and liberalism. His father was an art historian at the Martin Gropius museum and was an expert on the 19th century Prussian neoclassical architect Karl Friedrich Schinkel though he was also interested in experimental modern architecture and was a friend of architect Erich Mendelsohn. Sievers shared his father’s interest in architecture. Having travelled to Lisbon in 1934, while wary of Hitler’s ascension, he produced a series of photographs of the Embassy’s interior that constituted his first major body of work. Between 1935 and 1938 he studied at the Contempora School for Applied Arts in Berlin. Espousing the same principles as the Bauhaus, the school promoted the union between art and industry and this was an ethos that Sievers subscribed to for the rest of his career, never treating his creative and commercial projects differently.

While at the school Sievers was exposed to the approaches of New Photography and New Objectivity with its preoccupation with sharp focus and precision. While undertaking rigorous technical training at the school, Sievers began producing work that was more austere and formalist than his earlier photographs. After classes ended the school became a commercial studio where students could gain professional experience. It was here, and while under supervision, that Sievers produced some of his earliest advertising photographs including ‘Stocking advertisement at Contempora School in Berlin’, 1938.

In a bid to escape the rise of Nazism, Sievers applied for citizenship to Australia on the basis of his proficiency as a photographer and emigrated in 1938. While in Australia he continued to refine his stylistic mannerisms while working on major architectural and industrial commissions. His work highlights the functionality and physical reality of its subject – whether it be heavy machinery or rows of tiny matchsticks – but also its inherent beauty. He played with scale, extreme camera angles and intense shadow to dramatise his subjects and exaggerate form. While committed to a precise recording of the real, Sievers shunned straight documentary and often arranged his scenes like a tableaux. In some cases, the machines were inoperable in the configuration Sievers chose to photograph them in.