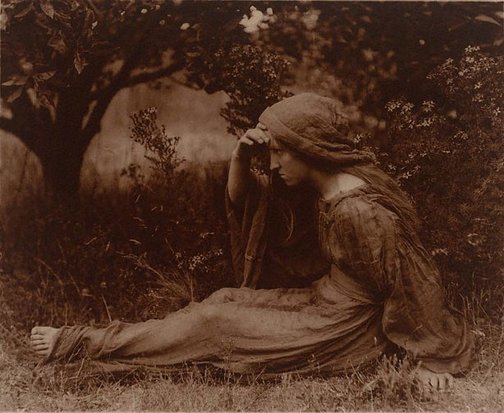 Frederick Allen Joyner was born in Adelaide. He studied law and subsequently had a successful legal practice in Adelaide for 50 years. Two of his neighbours, the professional photographer Ernest Gill and the teacher and curator H P Gill, encouraged his early interest in art and photography. He joined the South Australian Photographic Society in 1894 and eventually became its president. Like Harold Cazneaux, Joyner was influenced by the work of fellow South Australian John Kauffmann, who held a solo exhibition in 1898. In the same year, Joyner had one of his works selected by a panel, which included Alfred Stieglitz, for the Philadelphia Photographic Salon.

This photograph has been called his ‘most self-consciously posed work … the flimsily draped girl, melodramatically looking to a new alien world, echoing the Pre-Raphaelites and their yearning for the past pre-industrial age’.1 Joyner was unusual among his contemporaries on account of the number of subject, or genre, photographs he made. The first photographs which he exhibited publicly in 1894 were narrative images, using his own children as models. He also liked photographs printed in dark tones. One reviewer thought a character study ‘was somewhat marred by the colour it was toned’.2

Browse other works by Frederick A Joyner