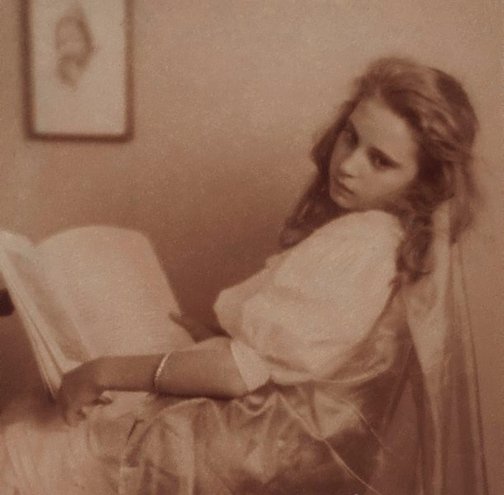 ‘With Meditation (Gracie Macbeth)’ photography revisits the work of Julia Margaret Cameron who was much admired by early 20th-century pictorialists. However, unlike Cameron’s portraits, the narrative in ‘Meditation (Gracie Macbeth)’ is less obvious and the pose not as stiff. The pictorial effect is constructed differently as by this time gelatin silver and faster cameras allowed for considerable leeway in manipulation of the various stages of the photographic process. The effect is more knowing and polished than 40 years before. This moody, soft-focus image is, as Helen Ennis has pointed out, a portrait ‘in which achieving a likeness was not a primary concern. As the title indicates, the evocation of a mood or a state of being is all important.’1 ‘Meditation (Gracie Macbeth)’ was exhibited in Cazneaux’s solo show in 1909 having been taken in the years after his arrival in Sydney in 1904.

Cazneaux had been ‘spellbound’ at the sight of John Kauffmann’s pictorialist photographs in 1898 which were exhibited in the first pictorial photography show to be seen in Australia. The exhibition, organised by the South Australian Photographic Society in Adelaide, included work by Henry Peach Robinson, Horsley Hinton and others associated with the British pictorialist movement. Cazneaux spent the next years perfecting his vision of photography as art of which ‘Meditation (Gracie Macbeth’) is a classic example. When Cazneaux moved to Sydney from Adelaide he had good friends in Sydney, including his cousins from the Peisley family (two of the Peisley girls featured in his 1906 photograph ‘The orphan sisters’) and the Macbeths.