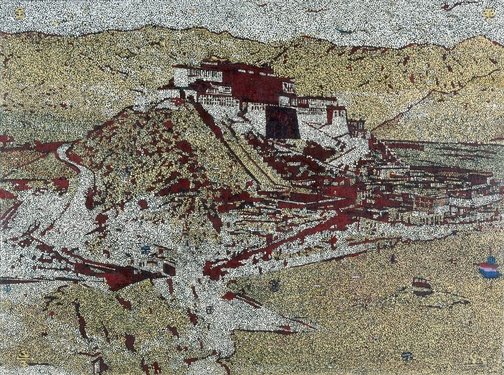 In his paintings Tim Johnson traces the connections that he believes underlie artistic and spiritual practices across countries and cultures. Johnson began making art in the late 1960s and, along with Mike Parr and Peter Kennedy, was one of the founding members of the Sydney cooperative experimental art gallery Inhibodress. The gallery only existed for two years but it was a catalyst for the development of conceptual, post-object and performance art in Australia. At this time Johnson was making artworks that explored light and visual kinetics, as well as installations and performances (including gigs with bands), films and photographs. Many of the projects were realised through audience participation and this spirit of somewhat counter-cultural communality has remained crucial to Johnson, who continues to collaborate with other artists.

Later in the 1970s Johnson returned to painting and in 1980 he acted on an earlier seemingly prophetic dream and visited the Aboriginal artists of the Western Desert, spending time at Papunya and working with senior artists in these communities. Johnson was at this time given permission by the senior artists to use the dots associated so strongly with Western Desert art and which have become integral to his own. His iconography is a mix of cultural borrowings and imagery from his richly inventive imagination. Concurrent with his study and experience of Western Desert painting, Johnson’s interest in Buddhism and Asian art developed as he explored early Chinese cave paintings, Tibetan and Japanese art, and later American Indian art.

'Infinite variations of solitude' is a painting of the Potala in Lhasa, Tibet, the traditional residence of the Dalai Lamas and the centre of Tibetan Buddhism and governance from which the current, 14th, Dalai Lama was exiled. The field of dots is painted over a dark red/brown ground from which the image of the Potala emerges. Apart from their source in Aboriginal painting, the dots also recall diverse influences such as the pointillism of some French impressionist paintings and the dot matrixes of photographic reproductions which were explored by pop artists such as Lichtenstein. In 'Visualisation' 1992 (AGNSW collection) spiritual beings cohabit with people in Johnson’s visionary universe as a plethora of figures, including Buddhas and American Indians, trees, monasteries, temples and mandala forms, floats across the canvas. The optically vibrating plenitude of the dots and the shimmering haze of colours contribute to a sense of space and time which is potentially boundless yet links the disparate elements into a visually harmonious field. Johnson explores how symbols and motifs from differing cultures, places and times can be combined visually as well as conceptually, resulting in these richly imaginative multi-layered paintings. They seem to propose a parallel perceptual plane to our own in which seemingly incommensurable strands of earthly life, otherworldly manifestations and spiritual imaginings can make sense as part of a greater whole.

The Means of Production 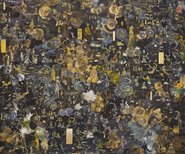