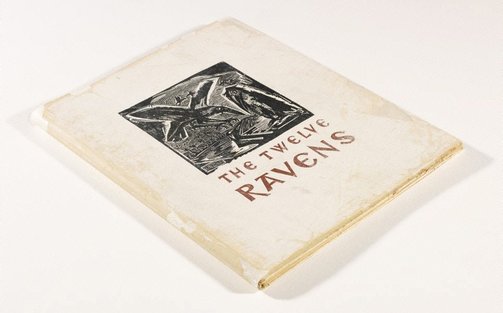 'The twelve ravens: a Lithuanian fairy tale' is an artist's book illustrating a traditional Lithuanian fairy tale (in English translation) with 9 original woodcuts by Ratas. The book is in the European tradition of fine, limited edition artists’ books, and is of a high quality of production with hand-set letterpress text and individually printed woodblock prints as illustrations.

Vaclovas Ratas was a Lithuanian émigré artist who arrived in Australia in the years immediately following WWII. Ratas was instrumental, with a select group of other artists (including fellow-Lithuanians Eva Kubbos and Henry Salkauskas), in the revival of contemporary printmaking in Sydney in the early 1960s.

Ratas' prints in this book have a deftness of execution and pictorial clarity that reflects his talent, drawing from the folk traditions of his roots, but with a modern sensibility. This was a trait increasingly common with a number of pre-war European printmakers of his generation (such as the German expressionists).

Vaclovas Ratas was born in Lithuania in 1910. He studied graphic art at the National Art School in Kaunas, with additional studies in Germany and Italy. He exhibited his work from the time of his graduation in 1935. From 1937-44 he was Curator of Art at the Ciurlionis National Art Museum in Kaunas, until he moved with his family to Austria. Following the war, he moved to Augsberg, Germany where he established an art school and produced this book and was one of four artists whose work was included in another, 'Forty woodcuts'. He migrated to Perth in 1949 and settled in Sydney in 1954. He was an active member of the Contemporary Art Society and the Sydney Printmakers, and exhibited extensively in subsequent decades. He died in Sydney in 1973. Ratas is best remembered as a printmaker who was unafraid to experiment with materials and methods.