NICHOLSON worked as a wood engraver, illustrator, theatre designer, painter and lithographer. From the mid 1890s he collaborated with his brother-in-law, James Pryde, on a series of posters and illustrated books broadly based on the poster style of Toulouse-Lautrec and Bonnard. He made his first appearance as a woodcut artist in the influential magazine, ‘The Dome’ 1897. Most of his experimentation with woodcut illustrations (characterised by effects of massed shadow and bold outline) came pre-1900, although he contributed to journals spasmodically until the 1920s. Nicholson’s later career was almost entirely spent painting. He was knighted in 1936. 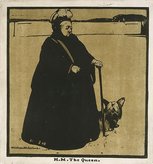 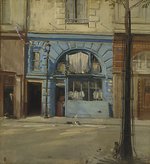