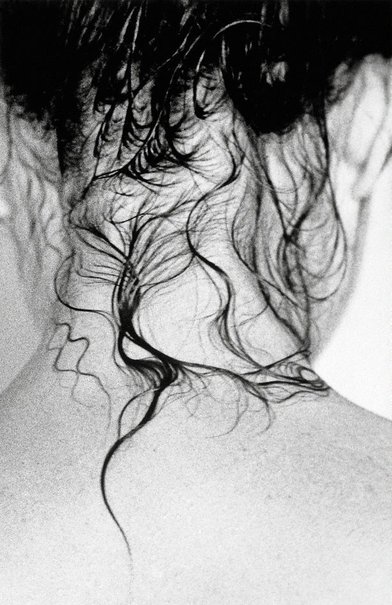 Ian Dodd has described his work as 'exploring the magic and the real, the human, erotic and eccentric'.1 He is a Sydney-based photographer whose work has become iconic, especially ‘Wet hair’, which has been reproduced extensively and was regarded as one of the most important images of Australian photography from the 1970s. Dodd, like Robert Besanko, is inspired by the magic of everyday life and with how to depict this otherworldliness in black-and-white photography. In addition, Dodd’s practice has a relationship to the work of New Zealand photographer Peter Peryer, who is also able to make the ordinary unusual in a subtle and poetic way.

‘Wet hair’ and ‘White peacock’ 1994 (AGNSW collection) are potent images that reveal the inherent mystery in the things around us. From a close-up view of dark wet hair on a woman’s white neck as it coils and weaves like marbled ink on a page, to a dazzling peacock’s display that appears in an electric shock of black and white, Dodd delights in the imaginative potential and beauty of his subject. He has an eye for unusual detail, particularly striking pattern and textures of natural and random occurrence. The uncontrived nature and familiarity of his subjects seems incongruous with the dramatically beautiful and intense appearance they make in his work. It is not that their exquisite beauty is unknown to the viewer, but that by recording such moments with the impact and wonder of first sight, Dodd unsettles the element of familiarity, reinstating and sustaining their fascination and magic by the transformative power of the black-and-white image.