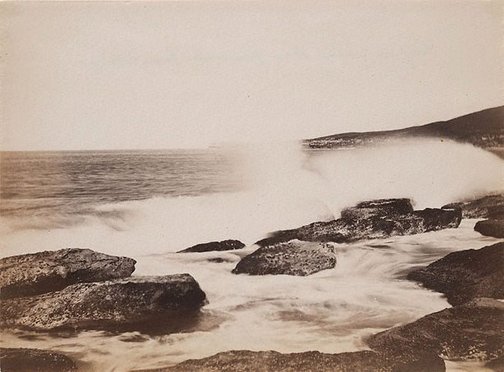 In 1876 the poet Henry Kendall wrote about ‘wave-worn Coogee’, celebrating the wildness of the place: ‘jags and points disrupted, gaps and fractures fringed with light.’ Kendall’s picture of the turbulent coast of Coogee is in sharp contrast to the sun-filled and cheery beachscapes which Tom Roberts and Charles Conder painted there. Bayliss may have been familiar with Kendall’s verse, although the poetic notion of the ‘ever-restless sea’ was well established in 19th-century verse and art. The AGNSW acquired their painting of this title by W Lister Lister in 1892. Poetic and romantic allusions aside, photographs of the sea – ‘instantaneous’ photographs which demonstrated a photographer’s technical abilities – were not uncommon. As one reviewer noted about the genre: ‘several instantaneous views of scenes, into which water in a state of motion enters, are highly artistic and effective.’1

Purchased with funds provided by the Photography Collection Benefactors' Program 1999