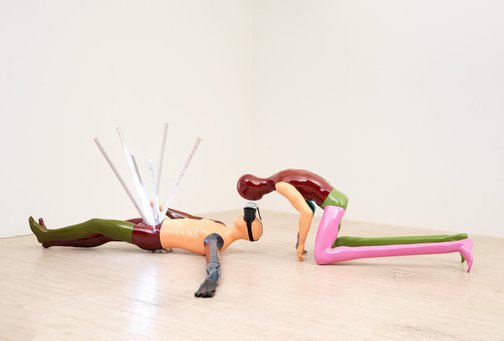 Justene Williams is best known for making live and video performances, which involve elaborate makeshift sets as well as costumes that distort the body. 'Insight' has a similarly eccentric, provisional feel. With their colourful mismatched segments, the mannequins appear as though assembled from random parts found at hand. Their strange, elongated limbs add a sense of the uncanny, and suggest a leak between the real space of the gallery and the virtual world conjured by the headset. The title hints ironically at the vacuous dimension of digital culture: the all-important role of spectacle in an endlessly expanding universe of images. Tellingly, one of the figures is immersed in this realm, while the other is alienated. In a typical gesture, Williams has incorporated a recycled - and decidedly unspectacular - element. The sticky glove has featured in a number of her earlier works and is covered in the residues of their making.