Shearing shed, from the album Collection of a country property, New South Wales 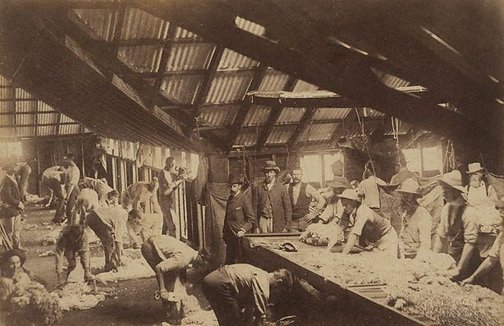 This photograph is from a series commissioned by the squatter E A Westby in the 1880s. It was taken in the old Pullitop Station shearing shed near Wagga Wagga in New South Wales, where at least 100 000 sheep were shorn annually. The well dressed man at the centre of the photograph is probably Westby, who owned the property until 1911, with his overseer and shed boss standing behind him. The photograph has occasionally been compared to Tom Roberts’s iconic image ‘Shearing the rams’ 1888–90. At a time when mechanical shearing was being introduced, both Bayliss and Roberts depicted traditional blade sheds with men at work. A smiling boy carrying a fleece appears in the lower left corner of both works.

Bayliss’s photograph has been called ‘a portrait of ownership’ rather than a record of shearing.1 Although the photograph clearly makes reference to social order (the owner and his staff, placed at the centre of a v-axis, are comparatively inactive), it would be simplistic to treat ‘Shearing shed’ simply as a text of ‘class-based seeing’. As in the stories of Henry Lawson and the poems of Banjo Paterson, it is the workers who are the principal subjects of this composition, as they go about their shearing, sort and lay out, pack into bales or just take ‘a breather’ by the window.