Study for 'Something is going to fall like rain' 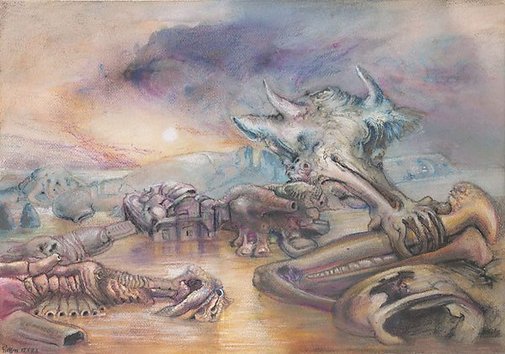 The title of this work is from three lines in W H Auden's poem 'The witnesses' 1932-34: 'The sky is darkening like a stain;/ Something is going to fall like rain,/ And it won't be flowers'.

'... It was one of the key poems that I discovered many years ago, that had an effect on me like the T S Eliot poems', Gleeson quoted in Renée Free's unpublished catalogue of James Gleeson's work.

'This has an even more tormented sky ... In a key position in it, a fairly generalised adaptation of El Greco's 'View of Toledo' [circa 1597-99, Metropolitan Museum of Art, New York]. This has been a painting I always admired and have never been disenchanted with ... it is one of THE greatest landscape paintings of all time to my mind. I wanted to imply something of the mood of that painting but transmuted into an imaginary world beyond the normal visual experience one could have in nature ... I was very conscious of the fact that it was painted at a time when the Inquisition was in full force and that the burning of heretics was probably going on at the very moment when the painting was made. I felt the world today is in a predicament not unlike that', Gleeson quoted in Free.

James Gleeson
Study for 'Something is going to fall like rain'