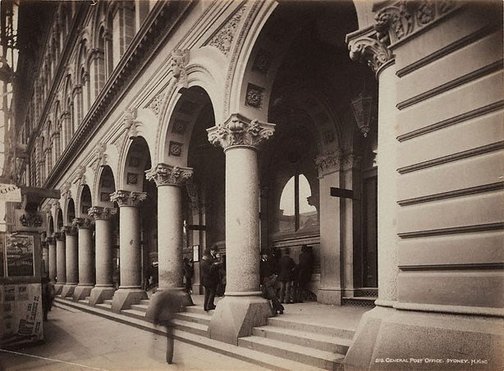 Henry King was born at Swanage in Dorset, England, and brought to Australia as a baby. Very little is known of his early years, apart from what can be gleaned from registers and directories: he served an apprenticeship under photographer J Hubert Newman, married Elizabeth Laing in 1879 and then entered into a partnership with William Slade. In 1880 Slade and King established a photographic studio at 316 George Street, Sydney, which Slade later continued as sole proprietor. King, while making his living through portraiture, eventually became known for landscapes, his images of the ‘vanishing race’ of Aborigines and the documentary photography which he undertook for institutions such as the AGNSW, the Australian Museum and the General Post Office (GPO). By 1901 King was regarded by the ‘Australasian Photo-Review’ as ‘one of the oldest and one of the most successful photographers in New South Wales … a household word’.

During the 1890s King photographed most of the major buildings in Sydney, including the GPO, which was a popular subject for Sydney photographers. Designed by Government Architect James Barnet and completed in 1891, the GPO was considered, if not the finest, then certainly one of the grandest buildings in the city. Moreover, it was a potent symbol of modernity: the hub of a progressive city. The ghostly figure in the foreground of this photograph is a common presence in 19th-century outdoor photography, the result of slower exposure rates. Throughout the late 19th century there was reflection on the way in which photography could slow down the act of looking. Some thought photography might foster a new, more perceptive way of seeing. In 1901 the French novelist Emile Zola wrote that ‘you cannot claim to have really seen something until you have photographed it’.1